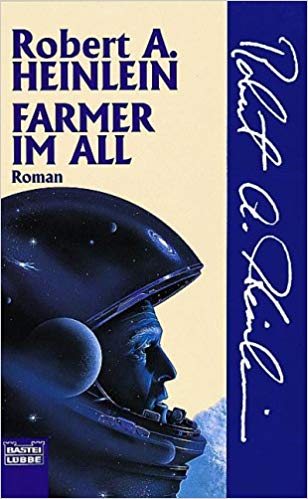 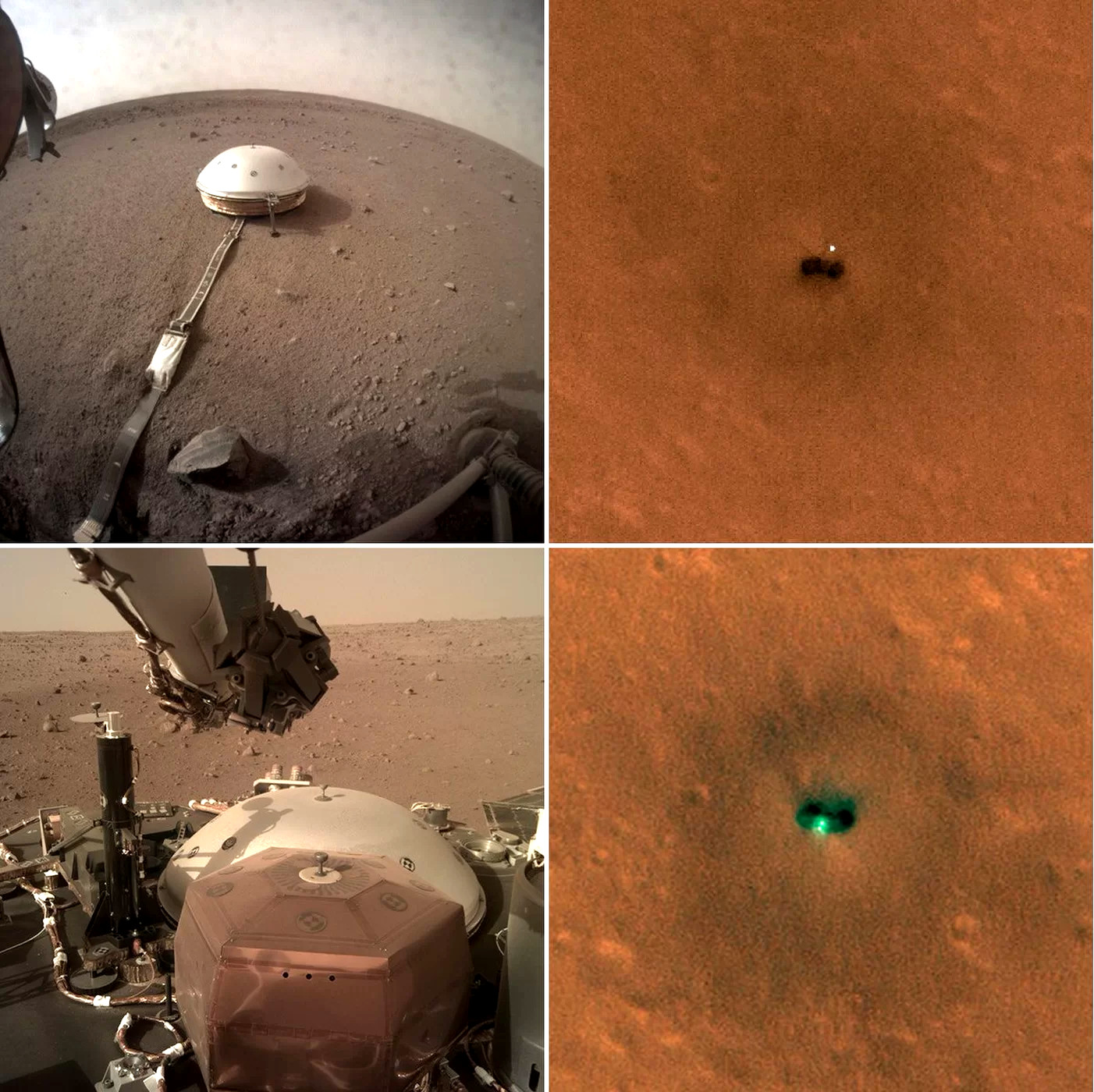 The Interior Exploration using Seismic Investigations, Geodesy and Heat Transport (InSight)[1] mission is a robotic lander designed to study the deep interior of the planet Mars.[1][11][12]

by Lockheed Martin, managed by NASA‘s Jet Propulsion Laboratory, and most payload instruments it carries were built by European agencies.

InSight‘s objectives are to place a seismometer, called SEIS, on the surface of Mars to measure seismic activity and provide accurate 3D models of the planet’s interior; and measure internal heat flow using a heat probe called HP3 to study Mars’ early geological evolution.[18] This could bring a new understanding of how the Solar System’s terrestrial planets – Mercury, Venus, Earth, Mars – and Earth’s Moon form and evolve.

One thing is for sure: it is 1000x time easier to survive / farm the desert of Gobi than on Mars, why? Because Earth got a magnetic shield… is it possible to install a Magnetic Shield Generator “in front of” Mars?

What could grow on Mars?

“The Great Oxygenation Event on Earth 2.45 billion years ago was caused by cyanobacteria.” (src) 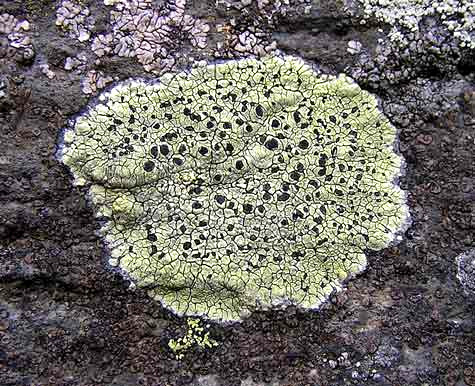 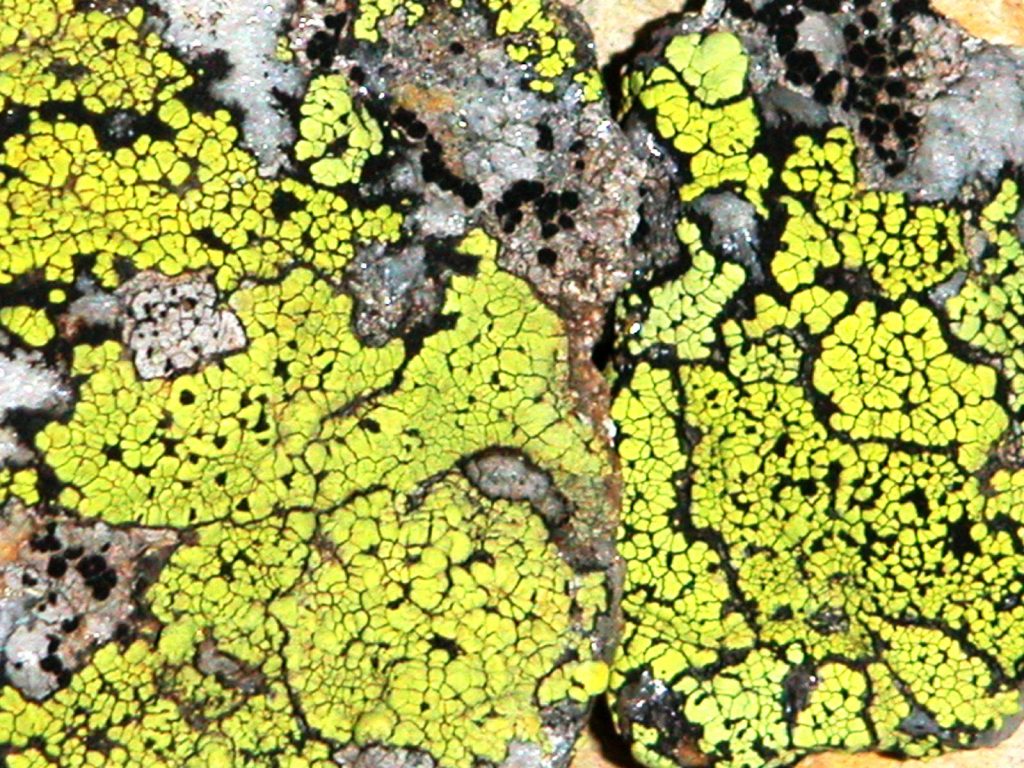 2012: “Alpine and polar lichens could also survive on Mars. Planetary researchers at the German Aerospace Center (Deutsches Zentrum für Luft- und Raumfahrt; DLR) simulated the conditions on Mars for 34 days and exposed various microorganisms to this environment. “During this period, the lichens and bacteria continued to demonstrate measurable activity and carry out photosynthesis,” says Jean-Pierre de Vera, a scientist at the DLR Institute of Planetary Research in Berlin and head of the Mars simulation project. The microorganisms adapted to this environment, primarily in niches in rocks and in fissures and gaps in the simulated Martian soil. This might be an indication that such adaptation strategies would make life possible in niches on the actual surface of Mars as well.

Do not forget about Earth!

It is still clever to care about the environment earth – because it buys us time – time that is needed to become a multi-planetary species – increasing mankind’s survive-ability in the universe. (one nuclear war/meteor/volcano could hurt mankind just as the dinosaurs)

The Problem: we are irrational

I sincerely hope – we manage to colonize Mars within my lifetime.

Maybe the Chinese finally make nuclear fusion working… right now it only works for 10 seconds and still uses more power than it generates.

With energy you can melt the ice – use it as drinking water (will have to add minerals) – clean/rinse the soil of the toxic perchlorates and use it for farming – at the same time CO2 should bubble from the soil.

Maybe the most important thing: Either have drilling equipment – to build your greenhouse underground – maybe with windows that filter the “bad radiation” but then it would get covered in dust fast anyway – because of it’s lack of Magnetic Shield – stellar radiation will kill everything – even plants: a Magnetic Shield Generator.

NASA plans exactly that… but not on Mars: 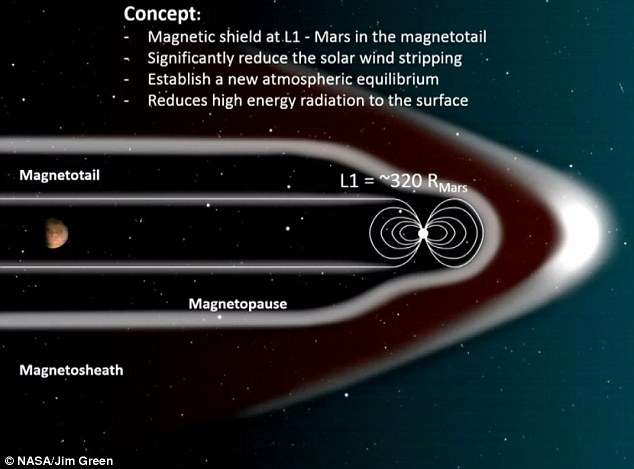 “This new research is coming about due to the application of full plasma physics codes and laboratory experiments. In the future it is quite possible that an inflatable structure(s) can generate a magnetic dipole field at a level of perhaps 1 or 2 Tesla (or 10,000 to 20,000 Gauss) as an active shield against the solar wind.”

“As a result, Mars atmosphere would naturally thicken over time, which lead to many new possibilities for human exploration and colonization.

According to Green and his colleagues, these would include an average increase of about 4 °C (~7 °F), which would be enough to melt the carbon dioxide ice in the northern polar ice cap.

This would trigger a greenhouse effect, warming the atmosphere further and causing the water ice in the polar caps to melt.

By their calculations, Green and his colleagues estimated that this could lead to 1/7th of Mars’ oceans – the ones that covered it billions of years ago – to be restored.” (src)

simulations say: it could work!

“What they found was that a dipole field positioned at Mars L1 Lagrange Point would be able to counteract solar wind, such that Mars’ atmosphere would achieve a new balance. At present, atmospheric loss on Mars is balanced to some degree by volcanic outpassing from Mars interior and crust. This contributes to a surface atmosphere that is about 6 mbar in air pressure (less than 1% that at sea level on Earth).”src: https://phys.org/news/2017-03-nasa-magnetic-shield-mars-atmosphere.html
… wow. this is crazy. what if it fails? X-D will there be backup shields? (i hope so) 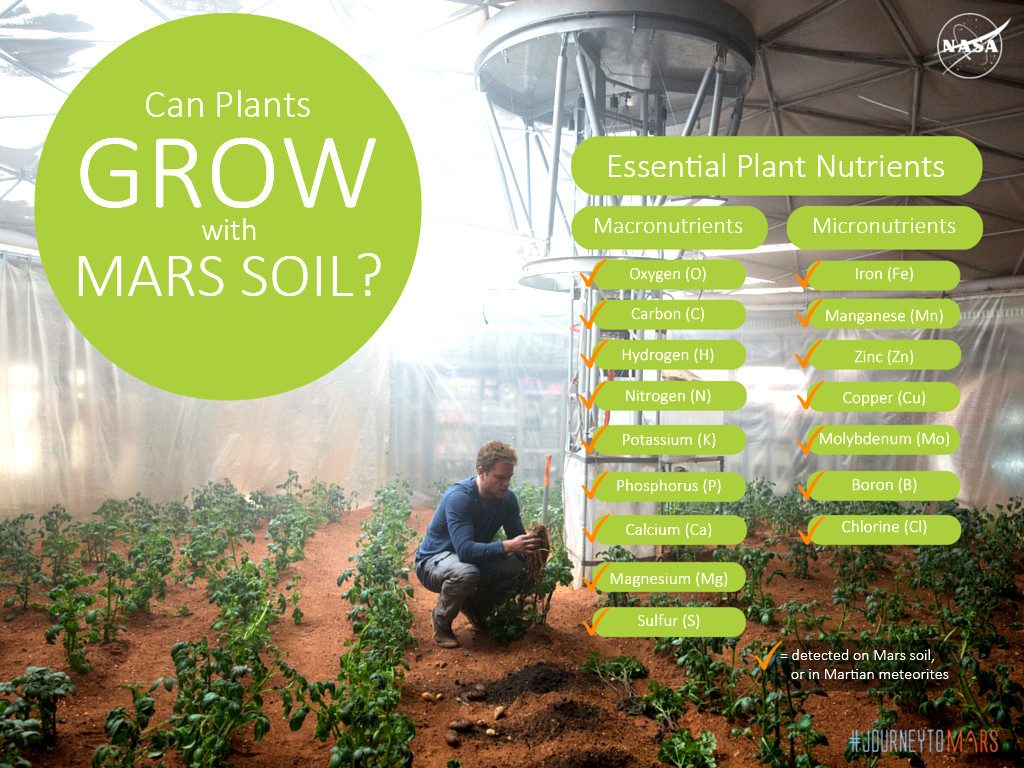 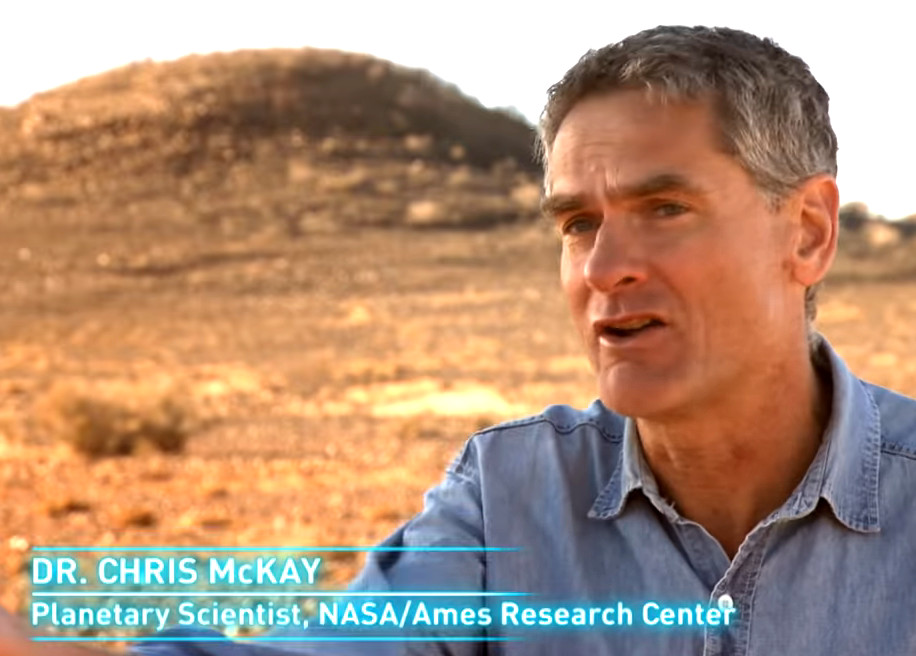 “Dr Christopher McKay, one of NASA’s most recognizable names in the field of astrobiology, argues that Mars probes to date have, quite literally, barely scratched the surface. 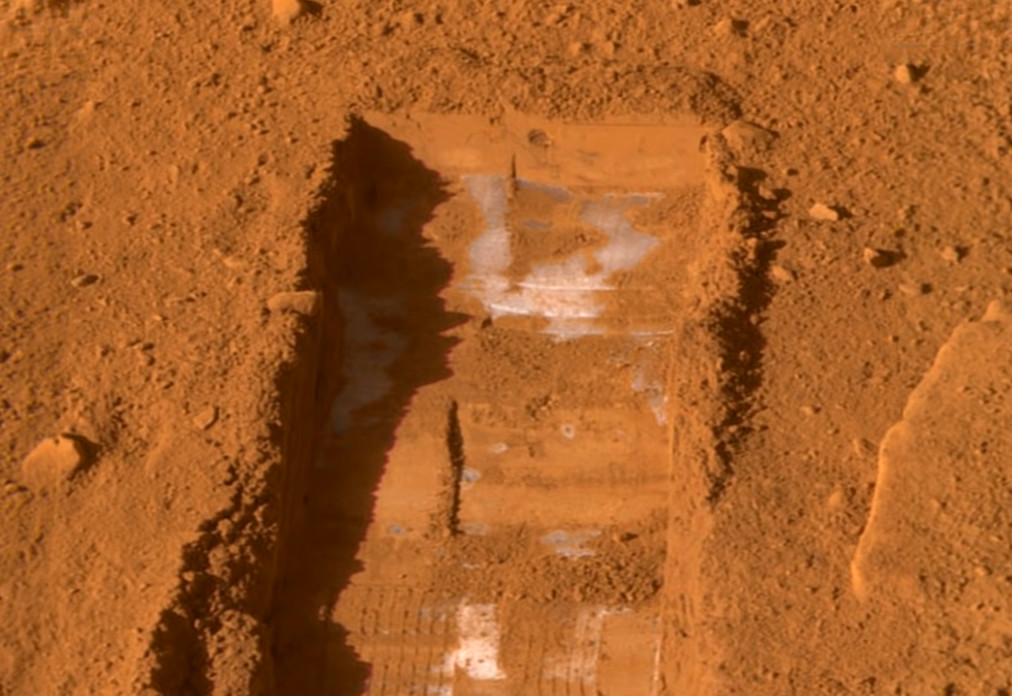 The answers, he suggests, lie much deeper than the nuclear-powered Mars Curiosity rover has drilled to date.

Part of the problem, according to McKay, is that geologists are setting the Mars exploration agenda and that astrobiology is not a top priority.

Having spent 30 years searching for signs of what he calls a second genesis — life originating from processes separate from what is known to have occurred on Earth — he now senses that the answer won’t come in his lifetime.” (src)

Mars probably had a lot more water 4 billion years ago

What we are fighting on Earth – would be welcome on Mars: Climate Change! “heat it up” “just add water” to Marsian soil could release the trapped CO2.

Terra-forming Mars from Red to Blue to Green: Where is the nitrogen?

“Nitrogen is essential for all known forms of life, since it is used in the building blocks of larger molecules like DNA and RNA, which encode the genetic instructions for life, and proteins, which are used to build structures like hair and nails, and to speed up or regulate chemical reactions.” (src) 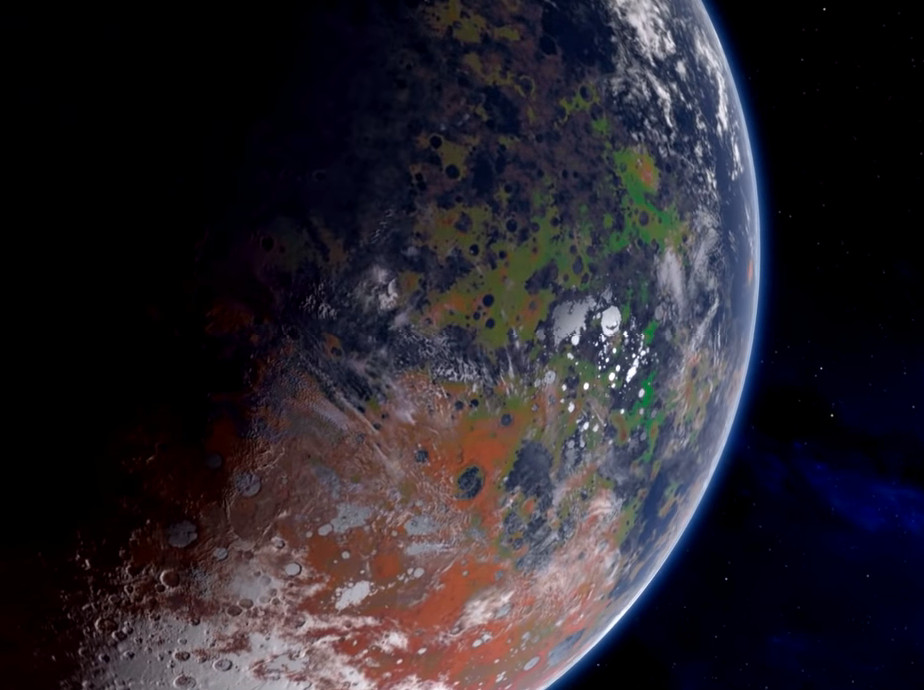 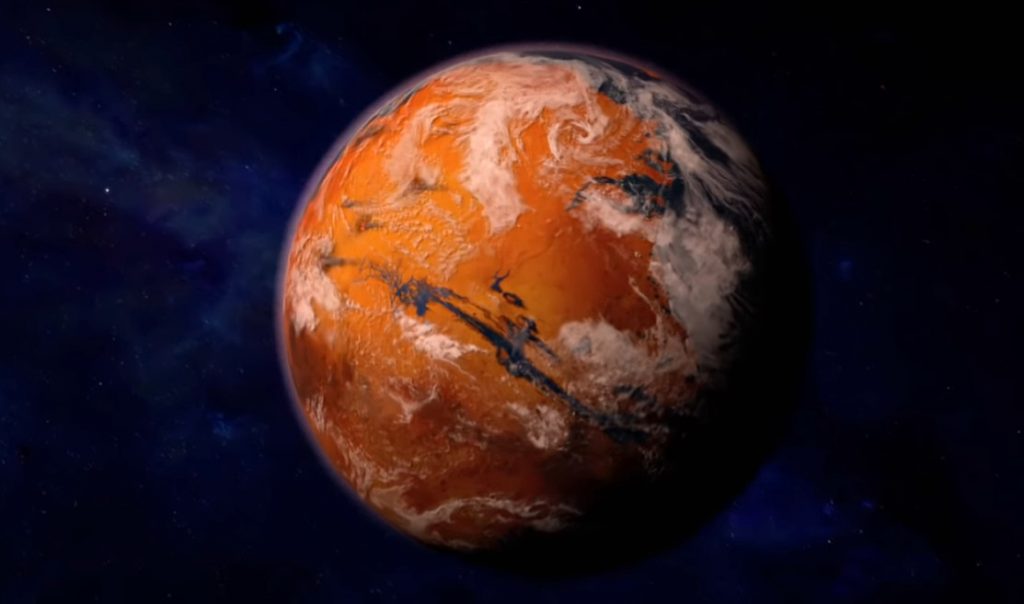 now it’s more like: a desert – with toxic dust (due to the presence of perchlorates)

Mars 2020 rover is an astrobiology will clarify on that.

“Apollo Program experience warns that opening an EVA hatch directly to the surface will bring dust into the ascent vehicle.”

“There are at least seven functional requirements that must be considered for a minimum functional tunnel that helps returning Mars crews comply with planetary protectionprotocols. The mass of a minimum functional tunnel for MAV ingress is estimated to be about 237 kg, not including mass growth allowance or a tunnel inflation system. Preliminary analysis indicates that an inflatable tunnel trades more favorably for mass than suitports in this application, but additional forward work is necessary to refine the concept and assess other alternatives.”

“Although not necessarily a practical solution, this “one job, one time” minimal functional baseline configuration will serve as a starting point from which to evaluate MAV ingress alternatives, or to measure the mass penalties as additional functionality is added.” (https://ntrs.nasa.gov/archive/nasa/casi.ntrs.nasa.gov/20160001028.pdf) 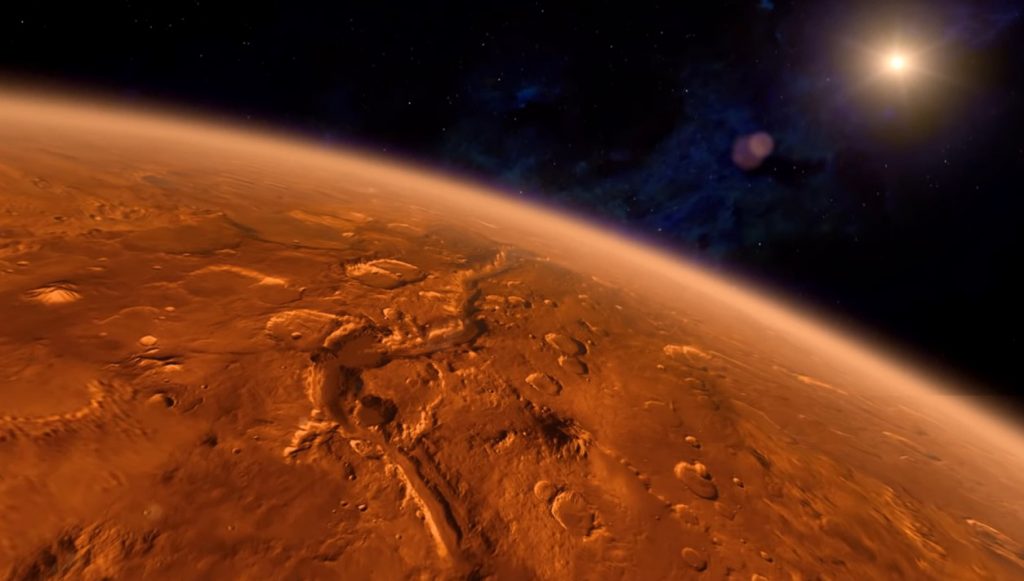 with ice at it’s pole’s 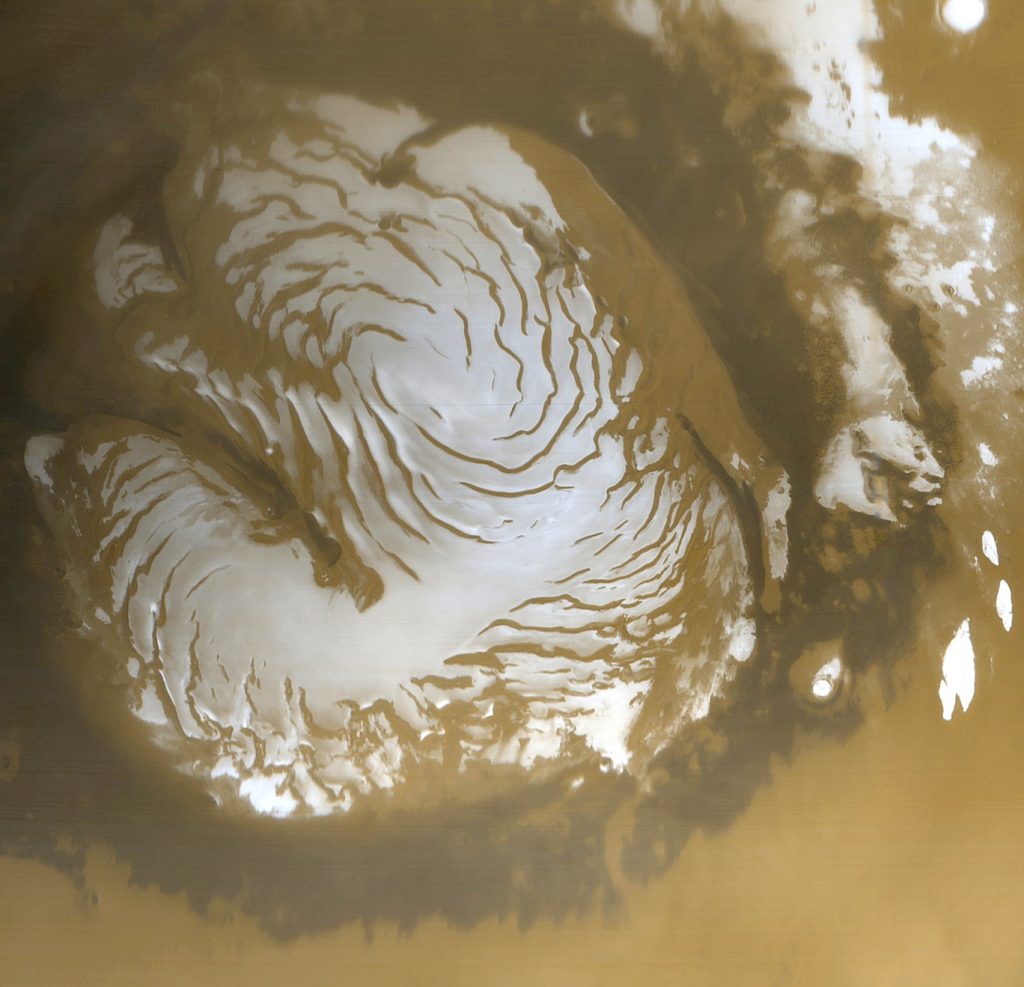 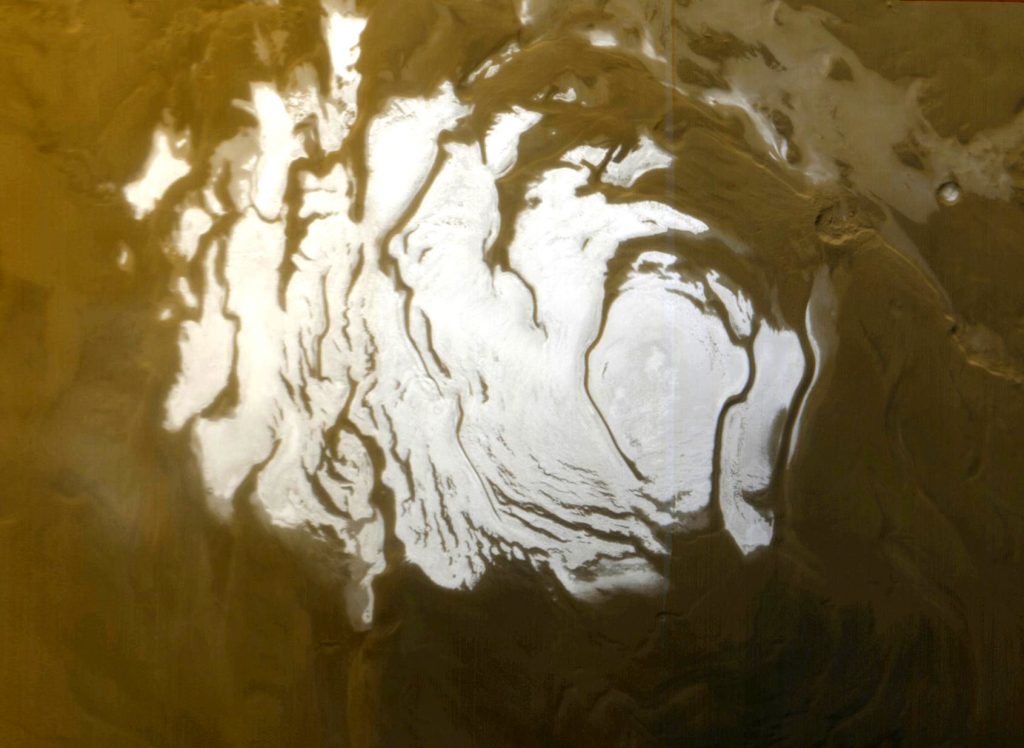 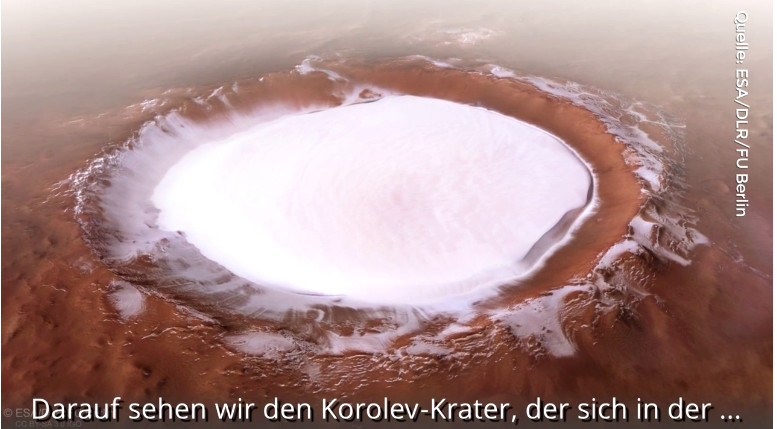 Martian soil is the fine regolith found on the surface of Mars.

Its properties can differ significantly from those of terrestrial soil, including its toxicity due to the presence of perchlorates.

Inhaling perchlorates is not a good idea – results may be: inflammatory infiltrates, alveolar collapse, subpleural thickening, and lymphocyte proliferation.[70] 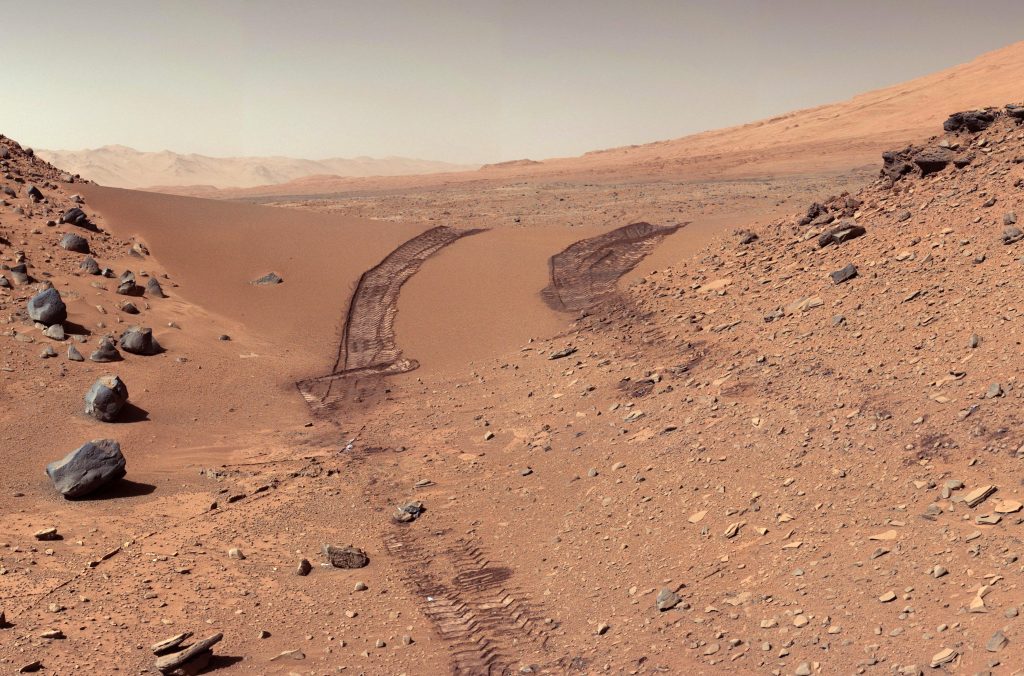 “Dr Christopher McKay: “If we can’t find life in the Atacama Desert (50x times drier than death valley) we are not ready to search for life on Mars”: CyanoBacteria

in other words: Future Rovers such as Mars 2020 rover – should be tested in Atacama – if they are capable of digging deep enough and be able to identify CyanoBacteria with it’s instruments. 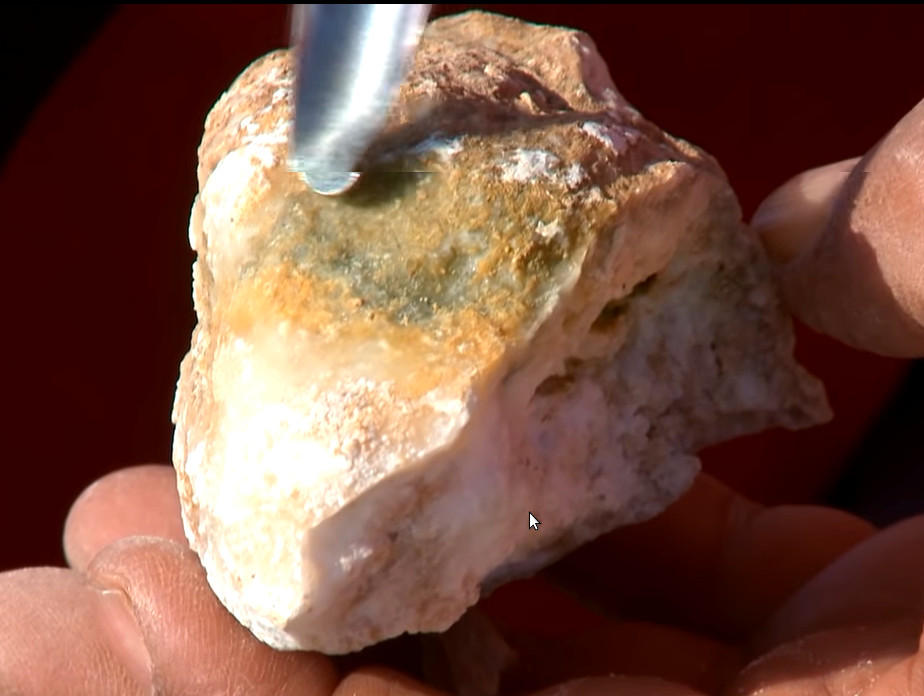 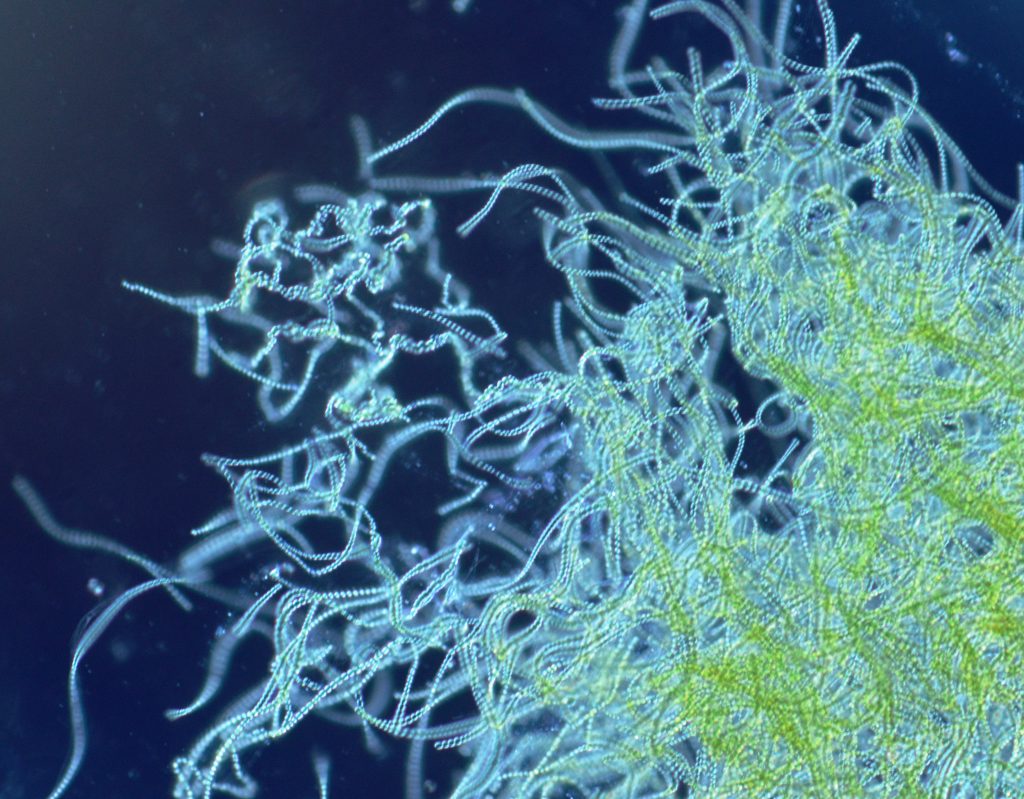 Cyanobacteria /saɪˌænoʊbækˈtɪəriə/, also known as Cyanophyta, are a phylum of bacteria that obtain their energy through photosynthesis,[4] and are the only photosynthetic prokaryotes able to produce oxygen.[5]

“Cyanobacteria are aquatic and photosynthetic bacteria that have been hugely important in shaping the course of evolution and the content of the Earth’s atmosphere. The oxygen rich atmosphere upon which we depend, was generated by vast numbers of newly arisen photosynthetic cyanobacteria during the Archaean and Proterozoic Eras.” (src) 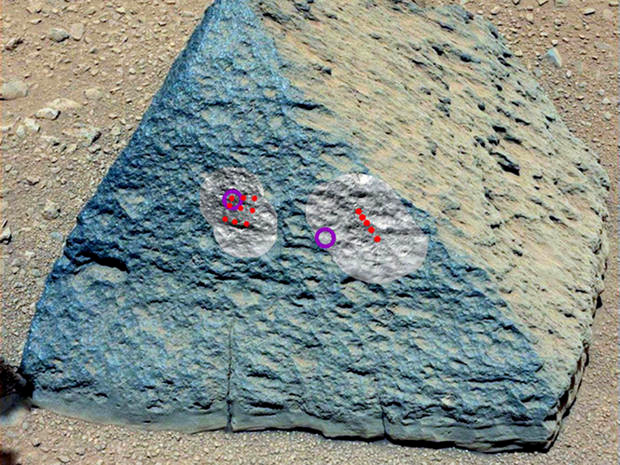 “The spectrum that we’re seeing was not what I expected,” said APXS principal investigator Ralf Gellert of Canada’s University of Guelph.

“It seems to be a new type of rock that we’ve discovered on Mars” that wasn’t seen by NASA’s previous Mars rovers Spirit and Opportunity.

Jake appears to have higher concentrations of elements such as

While previously unknown on Mars, this type of chemical composition is seen in a rare but well-studied class of rocks on Earth. On Earth, such specimens are found on oceanic islands such as Hawaii and in other places.

They are thought to form when interior rocks melt to form magma, which then rises toward the surface.

As it rises, it cools, and parts of the material crystalize, preferentially selecting some elements while leaving a remainder of liquid magma that is enriched with the left-behind chemicals. (src) 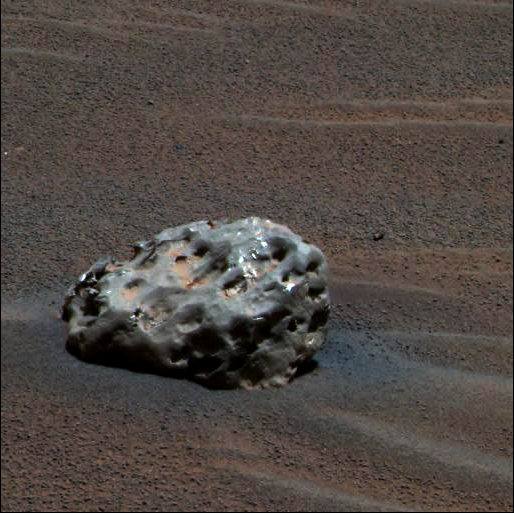 Heat Shield Rock is a basketball-sized iron-nickel meteorite found on Mars by the Mars rover Opportunity in January 2005.

The meteorite was formally named Meridiani Planum meteorite by the Meteoritical Society in October, 2005 (meteorites are always named after the place where they were found[1]).(src) 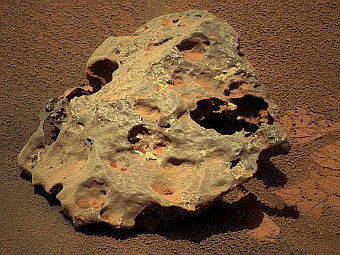 A FUTURE MARS ENVIRONMENT FOR SCIENCE AND EXPLORATION

The British Interplanetary Society – From imagination to reality https://www.bis-space.com/