if ssh server is up and secured, it is possible to do so much more with ssh like secure file-transfer of large files (SFTP via FileZilla) or even forward the graphical output of a server-application locally (only that window, not the full screen! 🙂

the local client is a laptop with external monitor, not so powerful

but one needs the massive computational power of a server running very resource intense (GUI) programs, while one does not want to sit next to a noisy server farm, ssh -X aka x11 forwarding is the answer.

the program will run on the server, but it’s graphical output will be displayed on the local client that is connected via ssh.

the best: it’s all ssh encrypted, the cons: forwarding graphical output over ssh and tcp-ip might be a bit slow refresh rate (no compression!?), if the dev-admin-user needs better performance (frame rate) take a look at xpra.

if the user-dev-admin needs full-screen output look at: x11vnc (it can DEFINATELY should be tunneled through ssh for weak vnc security reasons) or checkout vnc section of this article

from the ssh man page: ssh.man.txt

If the ForwardX11 variable is set to “yes” (or see the description of the
-X, -x, and -Y options above) and the user is using X11 (the DISPLAY en‐
vironment variable is set)

the connection to the X11 display is automat‐
ically forwarded to the remote side in such a way that any X11 programs
started from the shell (or command) will go through the encrypted chan‐
nel, and the connection to the real X server will be made from the local
machine. The user should not manually set DISPLAY. Forwarding of X11
connections can be configured on the command line or in configuration
files.

The DISPLAY value set by ssh will point to the server machine, but with a
display number greater than zero. This is normal, and happens because
ssh creates a “proxy” X server on the server machine for forwarding the
connections over the encrypted channel.

ssh will also automatically set up Xauthority data on the server machine.
For this purpose, it will generate a random authorization cookie, store
it in Xauthority on the server, and verify that any forwarded connections
carry this cookie and replace it by the real cookie when the connection
is opened. The real authentication cookie is never sent to the server
machine (and no cookies are sent in the plain).

If the ForwardAgent variable is set to “yes” (or see the description of
the -A and -a options above) and the user is using an authentication
agent, the connection to the agent is automatically forwarded to the re‐
mote side.

-X Enables X11 forwarding. This can also be specified on a per-host
basis in a configuration file.

X11 forwarding should be enabled with caution. Users with the
ability to bypass file permissions on the remote host (for the
user’s X authorization database) can access the local X11 display
through the forwarded connection. An attacker may then be able
to perform activities such as keystroke monitoring.

For this reason, X11 forwarding is subjected to X11 SECURITY ex‐
tension restrictions by default. Please refer to the ssh -Y op‐
tion and the ForwardX11Trusted directive in ssh_config(5) for
more information.

(Debian-specific: X11 forwarding is not subjected to X11 SECURITY
extension restrictions by default, because too many programs cur‐
rently crash in this mode. Set the ForwardX11Trusted option to
“no” to restore the upstream behaviour. This may change in fu‐
ture depending on client-side improvements.)

(Debian-specific: This option does nothing in the default config‐
uration: it is equivalent to “ForwardX11Trusted yes”, which is
the default as described above. Set the ForwardX11Trusted option
to “no” to restore the upstream behaviour. This may change in
future depending on client-side improvements.)

ssh may additionally obtain configuration data from a per-user configura‐
tion file and a system-wide configuration file. The file format and con‐
figuration options are described in ssh_config(5).

to achieve this simply setup ssh on server and client and then go: 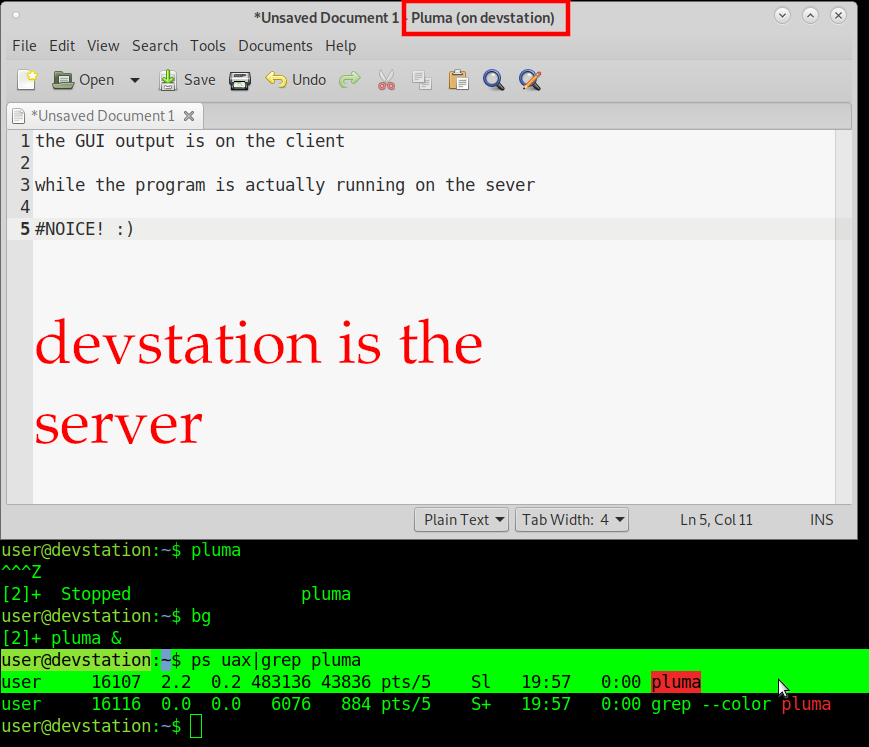 let the process keep running in the background

okay probably not intended for gaming 😀 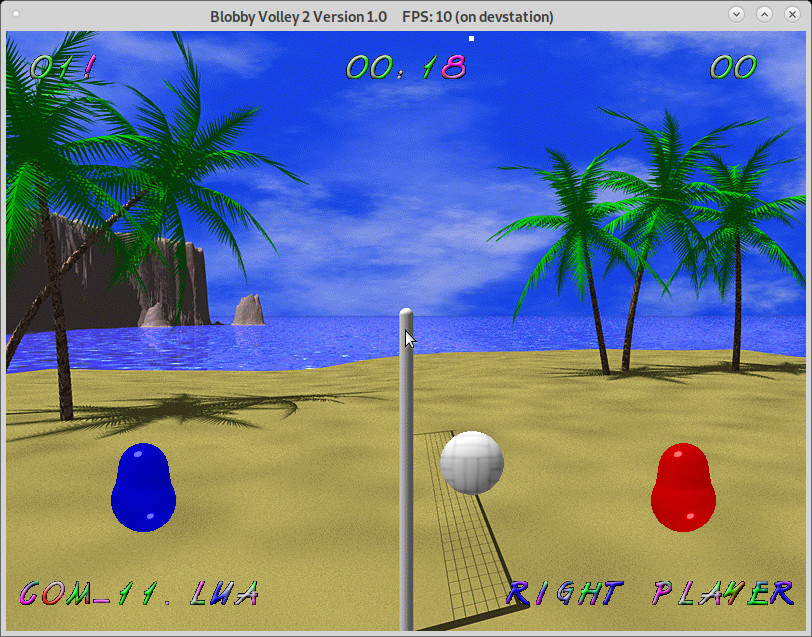 Requests compression of all data (including stdin, stdout, stderr, and data for forwarded X11, TCP and UNIX-domain connections).
The compression algorithm is the same used by gzip(1).
Compression is desirable on modem lines and other slow connections, but will only slow down things on fast networks. The default value can be set on a host-by-host basis in the configuration files; see the Compression option.

but all the cyphers seem to be “equally” slow X-D

“To clarify why X11 over ssh will never be fast: the X protocol deals with low-level drawing like lines and circles, and with low-level events such as “the mouse moved 3 pixels to the left.” Modern GUI toolkits like GTK and Qt don’t draw lines, they draw images. When X11 goes over SSH, it must constantly send image data and low-level mouse events. A high-level protocol like NX, VNC, or Remote Desktop can reduce bandwidth and latency by being aware of how toolkits work.” (src)

there seem to be problems forwarding a whole session, when different display-managers (gdm3, lightdm etc. pp.) are used – so it is probably better

1. to use a VNC server-client architecture

2. allow on server only VNC connections from localhost

3. tunnel all VNC traffic over ssh

…so weak VNC passwords “do not matter” so much.

therefore it would be vice to tunnel VNC

tightVNCserver on Debian and Java Client on Windows 8 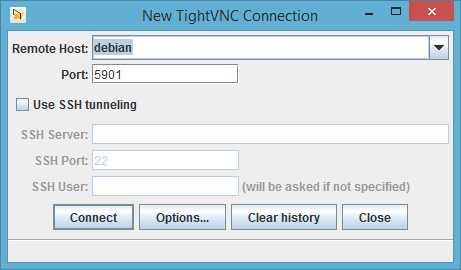 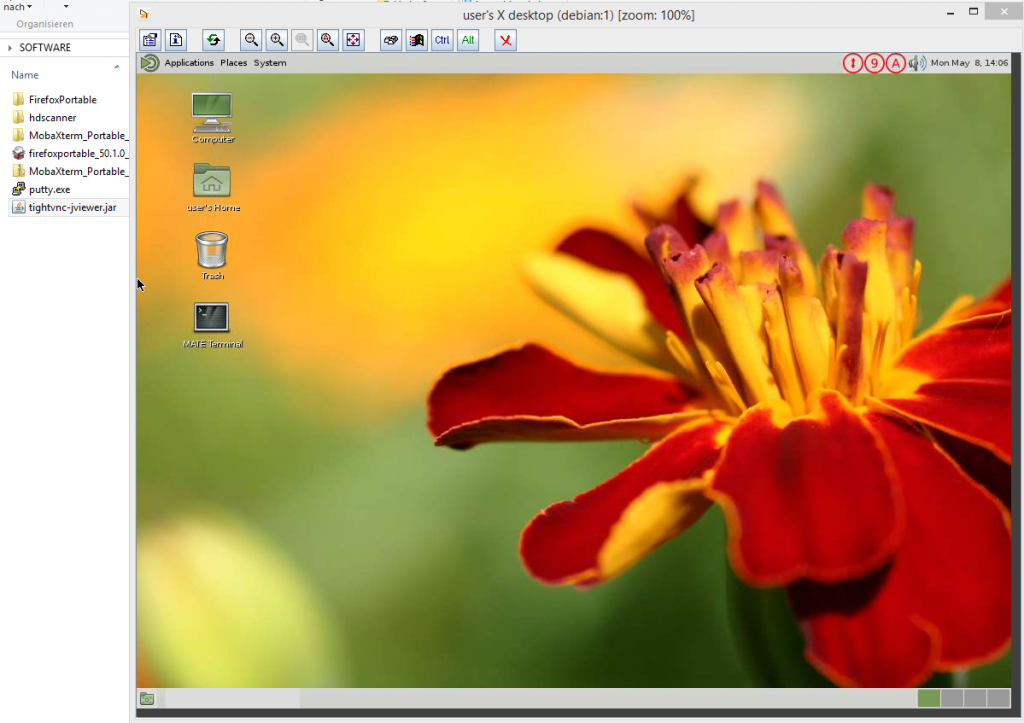 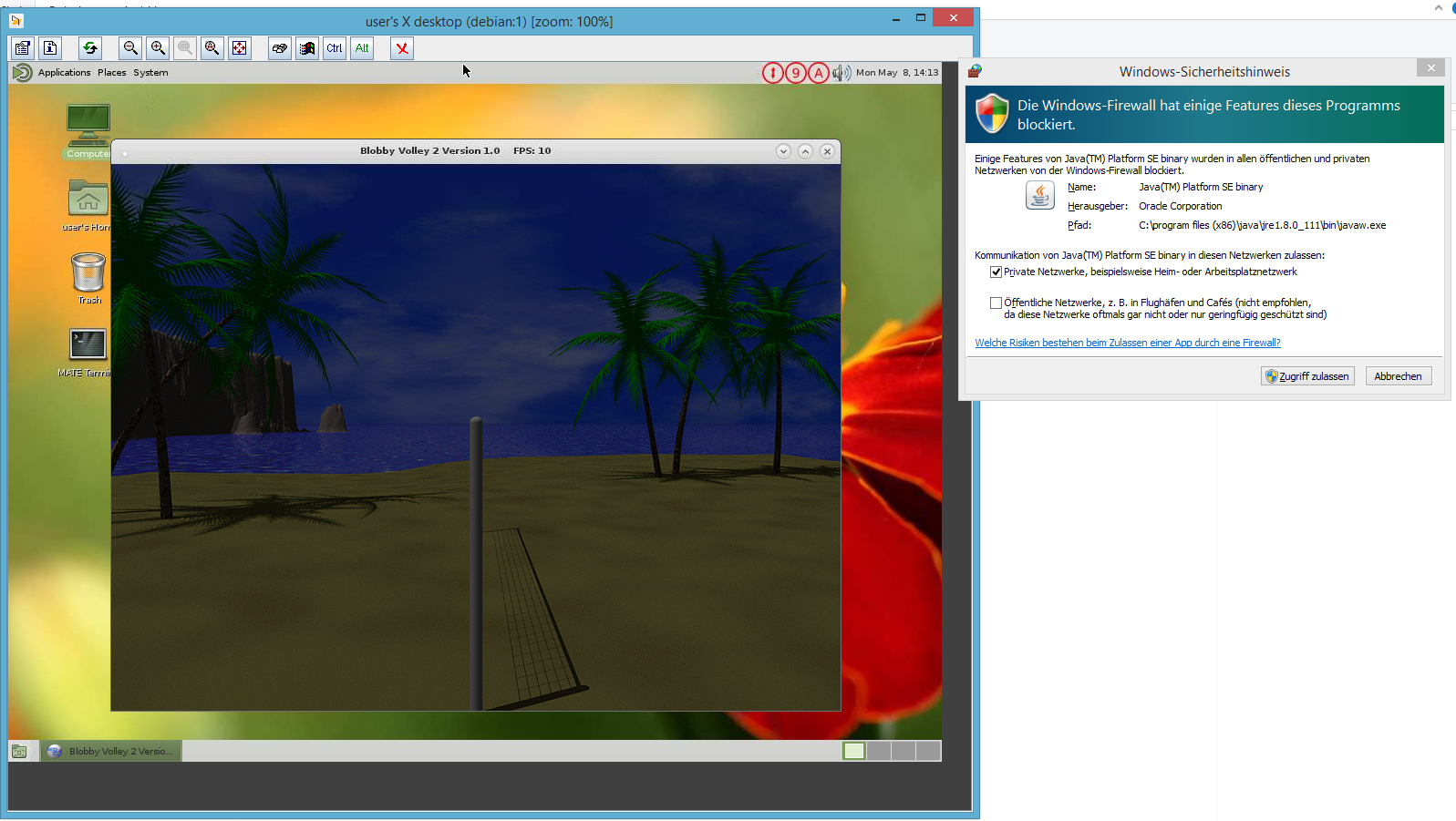 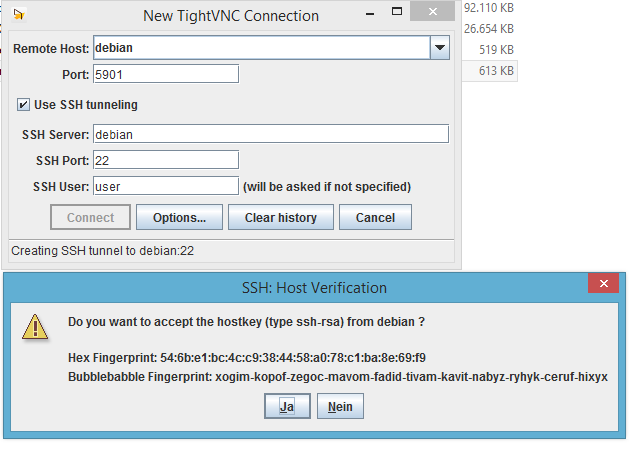 tightVNCserver on Debian8.7 and MobaXterm client on Windows 8 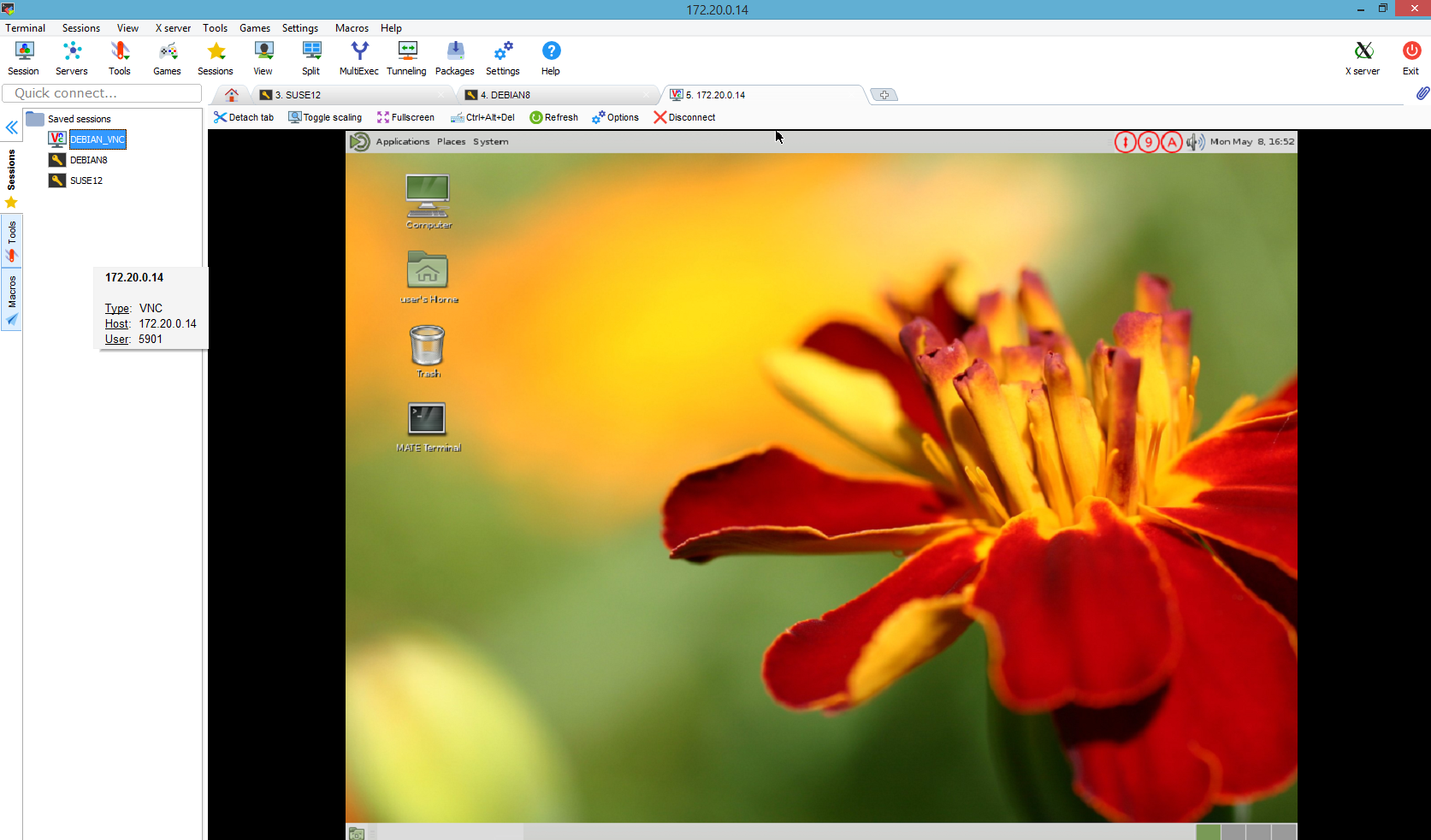