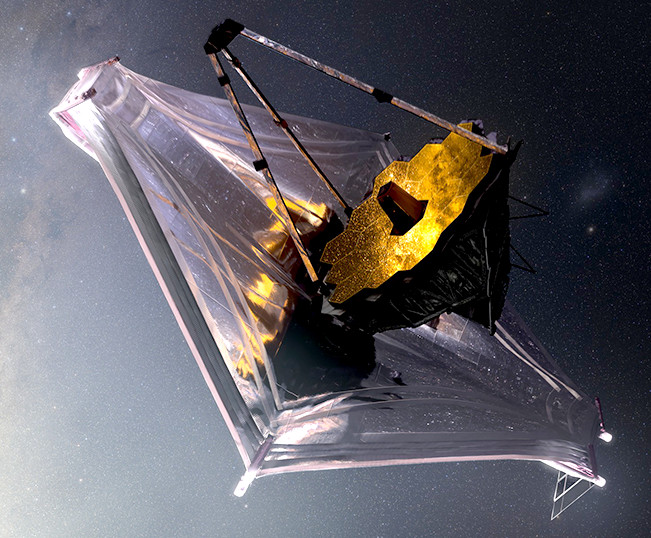 finally… all that wait is over… here come the first images of the $10 Billion telescope of almost 17 years of build time… (first design 1999, redesigned in 2005) 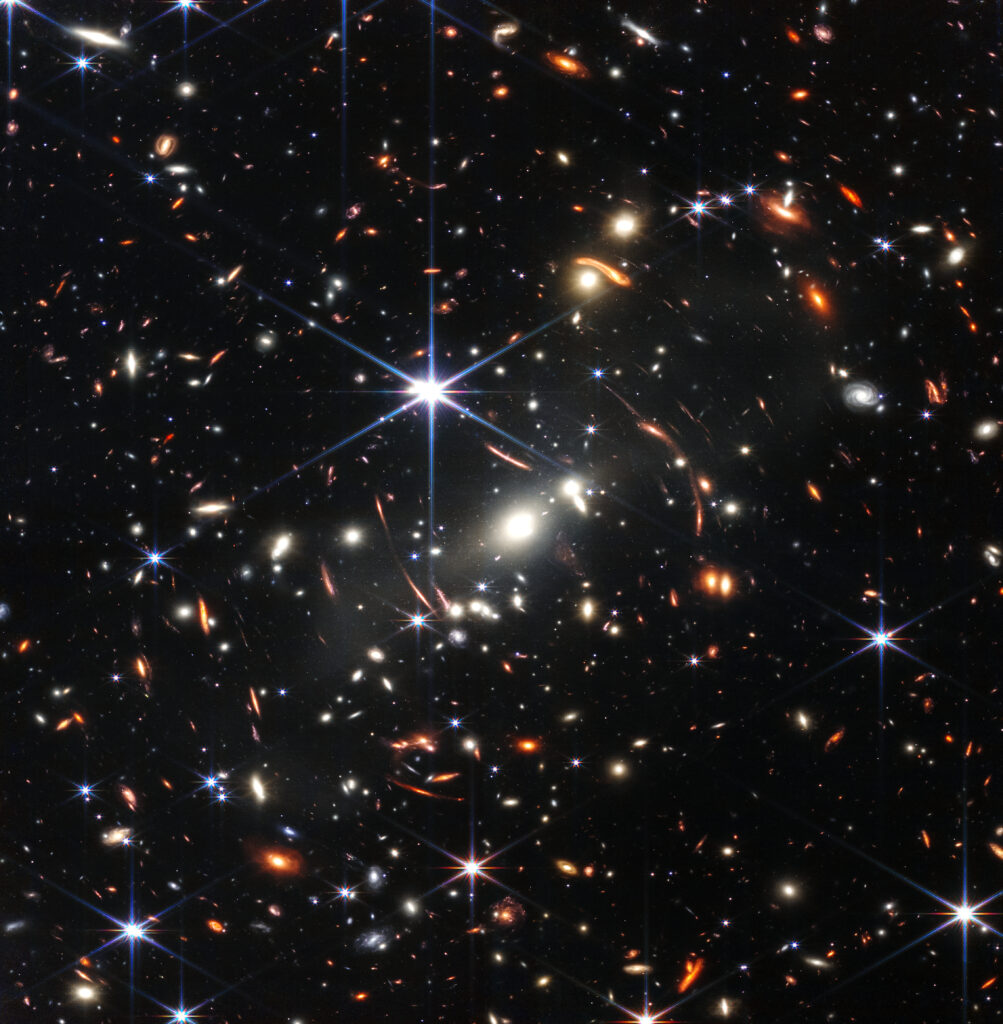 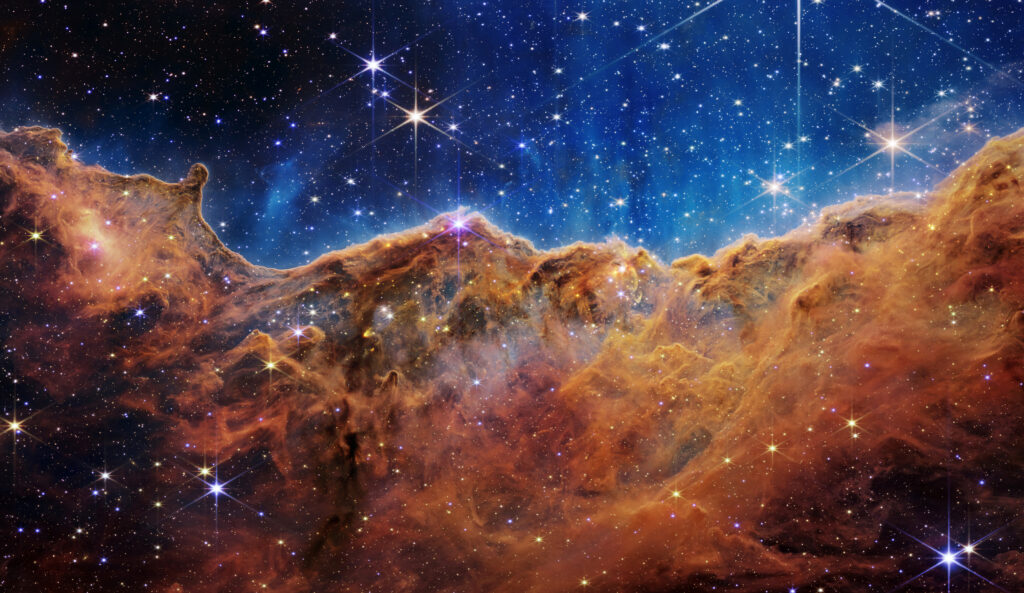 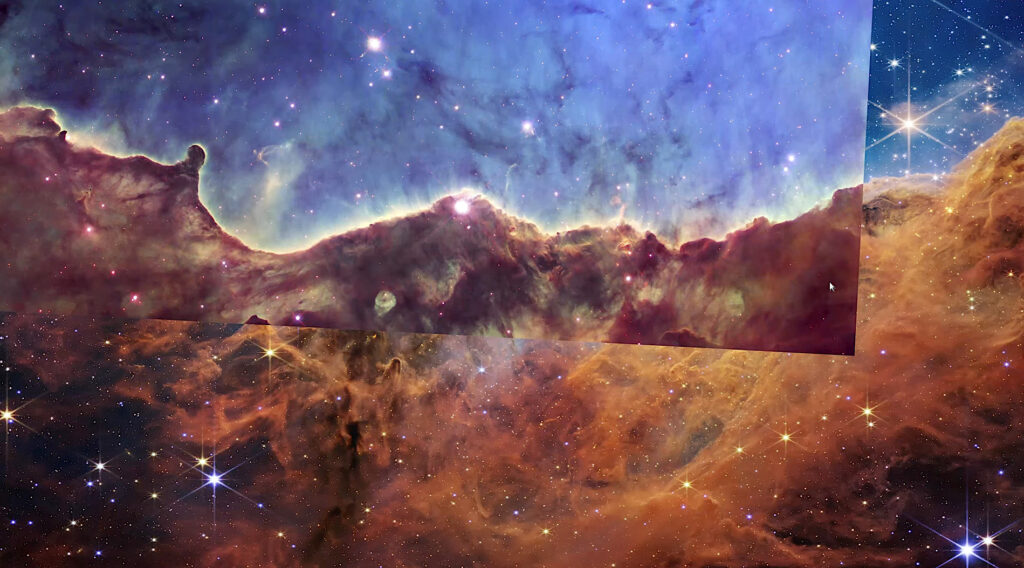 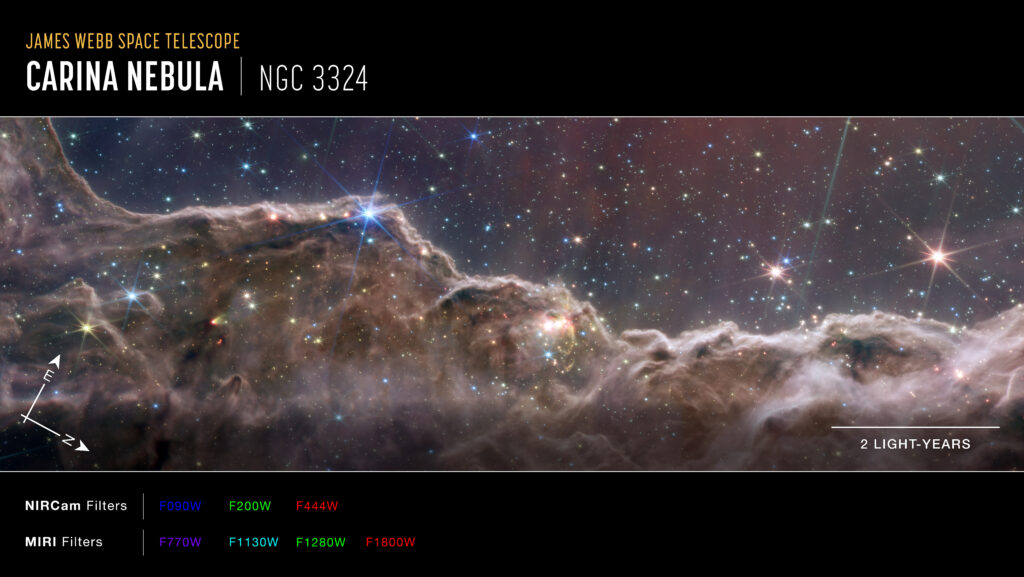 JWST combined the capabilities of the telescope’s two cameras to create a never-before-seen view of a star-forming region in the Carina Nebula. Captured in infrared light by the Near-Infrared Camera (NIRCam) and Mid-Infrared Instrument (MIRI), this combined image reveals previously invisible areas of star birth.
What looks much like craggy mountains on a moonlit evening is actually the edge of a nearby, young, star-forming region known as NGC 3324. Called the Cosmic Cliffs, this rim of a gigantic, gaseous cavity is roughly 7,600 light-years away. https://webbtelescope.org/contents/media/images/2022/031/01G781KB7TTZM1YTP855D46C1S 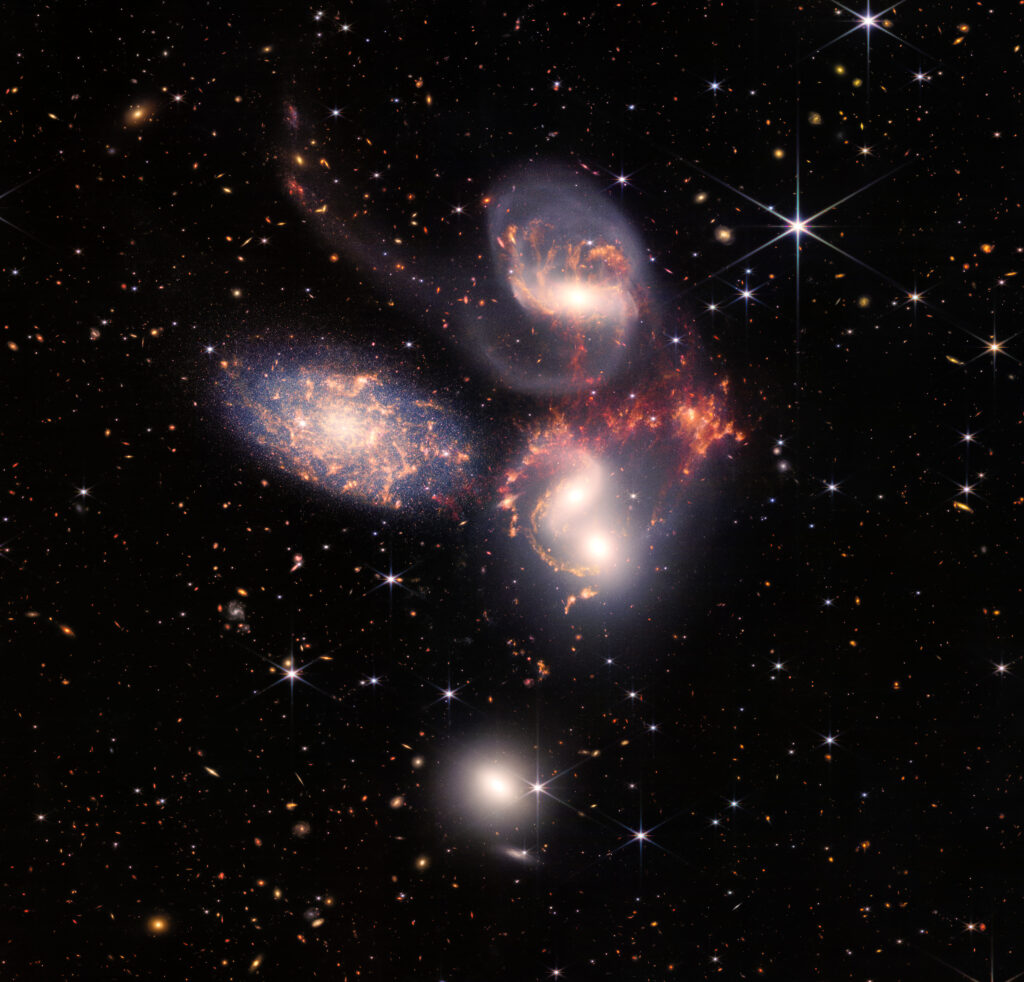 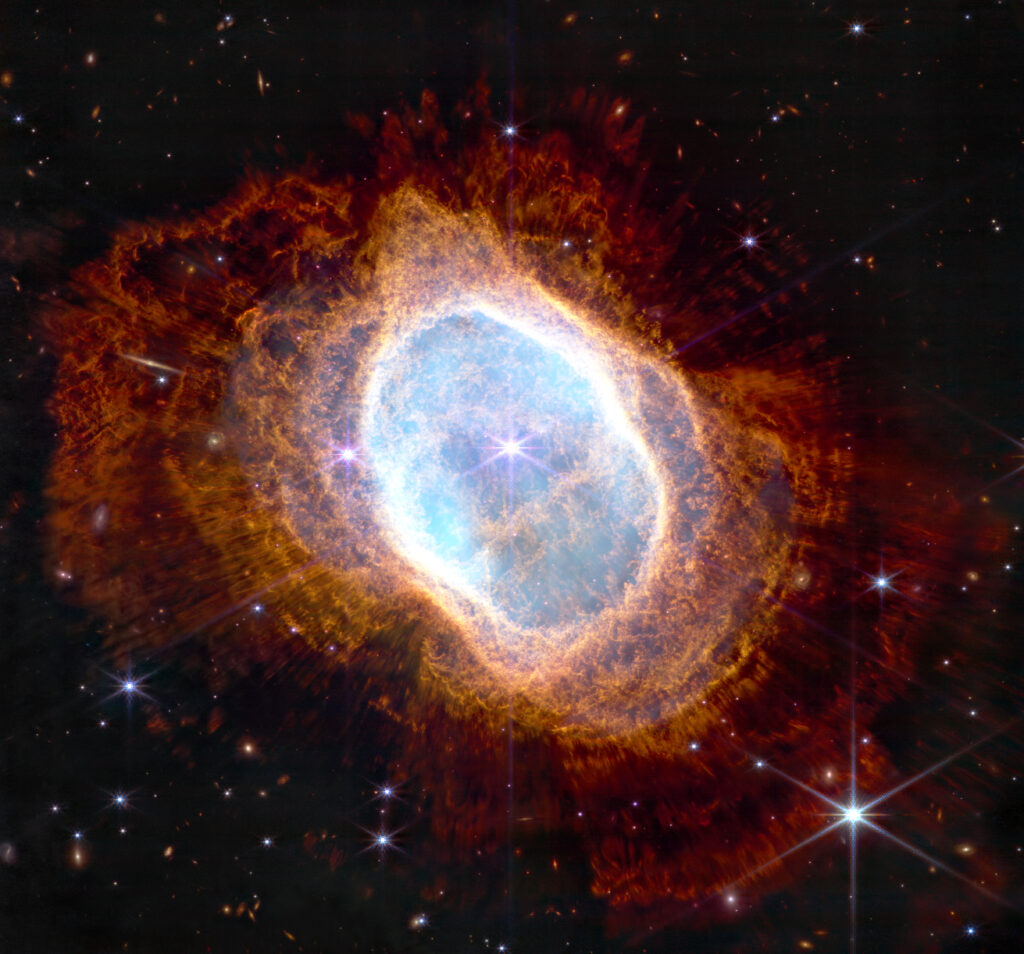 The bright star at the center of NGC 3132, while prominent when viewed by NASA’s Webb Telescope in near-infrared light, plays a supporting role in sculpting the surrounding nebula. A second star, barely visible at lower left along one of the bright star’s diffraction spikes, is the nebula’s source. It has ejected at least eight layers of gas and dust over thousands of years. https://webbtelescope.org/contents/media/images/2022/033/01G70BGTSYBHS69T7K3N3ASSEB 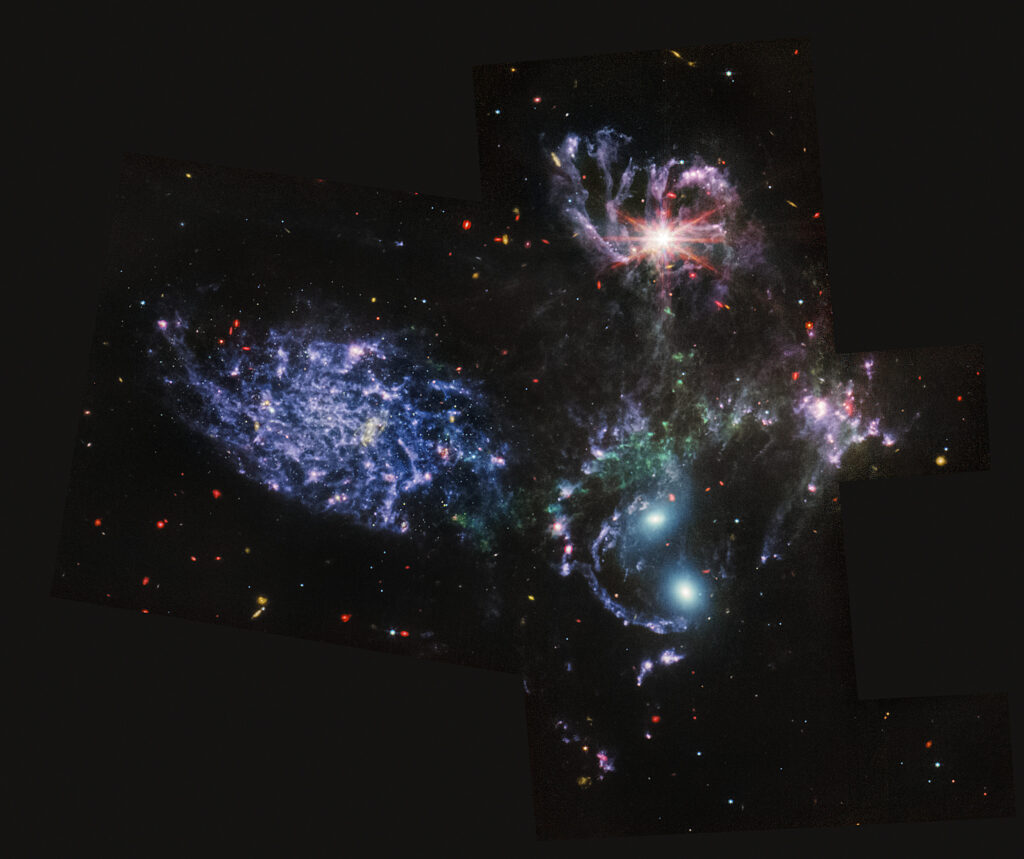 more pictures here: https://webbtelescope.org/news/first-images/gallery (<- for whatever reason also Hubble photos are in this gallery? (a bit confusing isn’t it?))

Several thousand scientists, engineers, and technicians spanning 15 countries have contributed to the build, test and integration of the JWST.[142] (src: Wiki)

why the hexagonal “glare” spikes effect?

It is called deffraction spikes