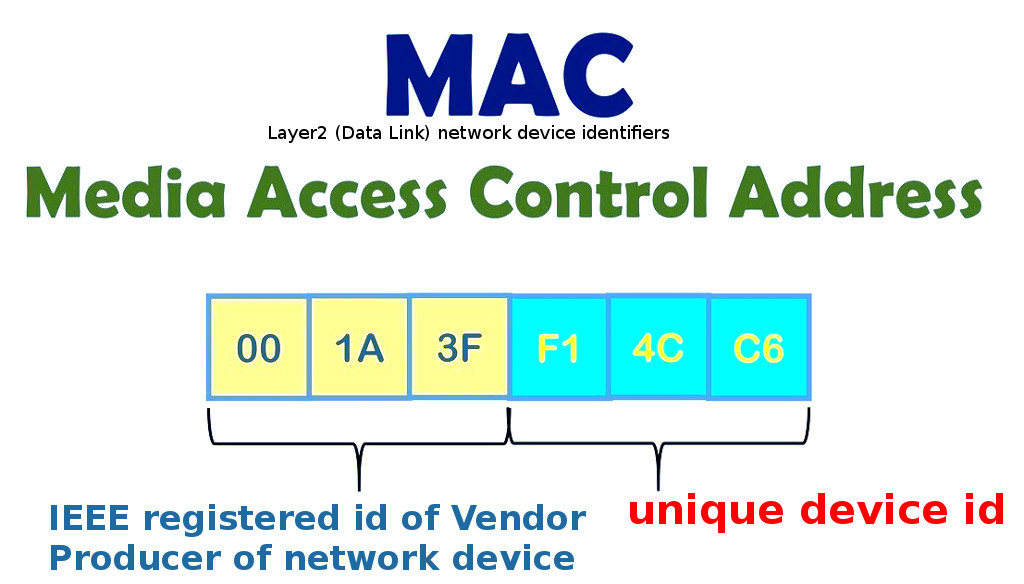 not every switch has an IP assigned (if it has no web management interface, it does not need to) but it will have a MAC address.

MAC address are per vendor and per device unique identifiers that are used on layer2 (Data Link Layer (src: Wikipedia)) of the network stack (switches and VLAN operate on this layer, switches need to know, what device are connected to what port in order to route the “frames” e.g. point to point transmission of data – no routing)

this is what makes NAT so great: a NAT router is the visible (publicly visible IP and MAC address) part of one’s network.

Behind the NAT can be a lot of devices (tablets, phones, laptops, servers…) but their MAC addresses is not exposed to the publicly visible internet (e.g. google can not tell if one is using a Dell Laptop or a Lenovo laptop… but it can tell what router and internet provider one is using)

“The leftmost 6 digits (24 bits) called a “prefix” is associated with the adapter manufacturer (M). Each vendor registers and obtains MAC prefixes as assigned by the IEEE.” (src)

Intel got a lot of registered MAC addresses

In June 2014, Apple announced that future versions of their iOS platform would randomize MAC addresses for all WiFi connections.

The Linux kernel has supported MAC address randomization during network scans since March 2015,[7] but drivers need to be updated to use this feature.[8]

one use case for frequent mac address changes: public wifi hot spots that limit one to 30min of free internet per MAC seen address…

good news: Debian already does it

bad news: Debian now also tries to get an dhcp assigned IPv6 address per default… but why would one needs this in a LAN?

should be turned of by grub boot to kernel option.

“Starting in Android 8.0, Android devices use randomized MAC addresses when probing for new networks while not currently associated with a network. In Android 9, you can enable a developer option (it’s disabled by default) to cause the device to use a randomized MAC address when connecting to a Wi-Fi network.

In Android 10, MAC randomization is enabled by default for client mode, SoftAp, and Wi-Fi Direct.

on linux distros one does not need additional software, onborad linux tools are sufficient and can be scripted as follows:

this script will use result from /scripts/mac_random2.sh

and asign it to the interface given

then use dhclient to get a new ip for this interface
(can not use old ip with new mac, won’t work, router get’s confused X-D)

one can leave out the monitoring part, but it’s interesting to see if a new ip get’s asigned or a old one.

How to Set Your MAC Address Randomly Using Linux

have a good time on this planet