firewall & pinguin: iptables where do thou go?

it is said that when using “ip-sets” iptables and nftables achieve almost same performance (amounts of ips possible to block, without server becoming slow/unresponsive)

Redhat and nftables on DDoS “so the only thing to fall back to is establishing a blacklist for all the different source IP addresses” (src) (which is exactly what iptables + cron + autoban.sh a simple bash script does)

2018-02: “The Linux kernel currently supports two separate network packet-filtering mechanisms: iptables and nftables.
For the last few years, it has been generally assumed that nftables would eventually replace the older iptables implementation;
few people expected that the kernel developers would, instead, add a third packet filter.
But that would appear to be what is happening with the newly announced bpfilter mechanism.
Bpfilter may eventually replace both iptables and nftables, but there are a lot of questions that will need to be answered first.” (src: https://lwn.net/Articles/747551/)
even faster X-D https://cilium.io/blog/2018/04/17/why-is-the-kernel-community-replacing-iptables/

and: will already established iptables scripts keep on working?

“We like iptables after all, this tool has been serving us (and will likely keep serving still for a while in many deployments) to filter out traffic on both per-packet and per-flow basis, log suspicious traffic activity, perform NAT and many other things.

It comes with more than a hundred of extensions that have been contributed along the last 15 years!.

Nevertheless, the iptables framework suffers from limitations that cannot be easily worked around:

These, among other things not listed here, triggered the nftables development which was originally presented to the Netfilter community in the 6th Netfilter Workshop in Paris (2008, France).” (src: wiki.nftables.org) 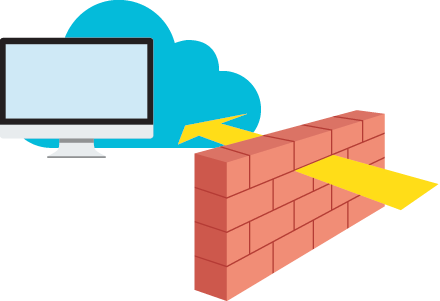 … well that might be the case, as i understand it, but there is another thing going on: new firewall implementation called Nftables!

firewalld has support for nftables.

But fail2ban for example and other tools (still?) seem to make problems.

code sanification: with ipv6 the iptables codebase was copied 4x times, not handleable.

This was announced in detail on firewalld’s project blog.

The feature landed in the firewalld 0.6.0 release as the new default firewall backend.

The benefits of nftables have been outlined on the Red Hat Developer Blog:

Confusing: the iptables command is still there, but it seems it does not work well, integration of tools such as fail2ban was not considered? So if fail2ban fails to block any ips… this might be the reason why.” (src: https://developers.redhat.com/blog/2018/08/10/firewalld-the-future-is-nftables/)

iptables is in development since 1998

“Netfilter and iptables were originally developed together, so there were overlaps in the previous development. See the Netfilter article.

Linux has a package filter as of Version 1.0. This was originally from BSD and was extended in Linux version 2.0 under the name ipfwadm. Rusty Russell reworked the packet filter and provided it as ipchains. It was integrated into Linux 2.2. Towards 1999, the Kernel and thus also ipchains was completely revised. Ipchains produced iptables, which has been included in the package since Kernel 2.4.

iptables maintains the original basic idea of ipfwadm: lists of rules each of which indicates what is checked in a package, and what is to be done with this package. ipchains introduced the concept of chains, and iptables expanded this to tables. One table is responsible for NAT, another for filtering. In addition, the three points where packets are filtered on their “journey” have been changed so that each packet only passes through a filter point.

To use this split allowed iptables, in turn, information obtained by the Connection-Tracking-Subsystem – this Information was previously tied to NAT. Thus, iptables has more possibilities than ipchains, since it can additionally monitor the state of a connection, redirect it, or stop and manipulate data packets based on the state, instead of doing so only by source or destination address. A Firewall such as iptables, which meets these requirements, is called stateful, while ipchains except in very limited exceptional cases was only stateless.” (auto translated from https://de.wikipedia.org/wiki/Iptables#Geschichte)

“iptables’ performance degrades as the number of rules increases”

“so the only thing to fall back to is establishing a blacklist for all the different source IP addresses.

And here’s also the connection to the previous setups:

Matching many unrelated IP addresses is likely to turn into large numbers of rules packets have to traverse.”

“created a stream of 100k packets per second using pktgen, which match the blacklist criteria.

Finally, here are the plotted results:” 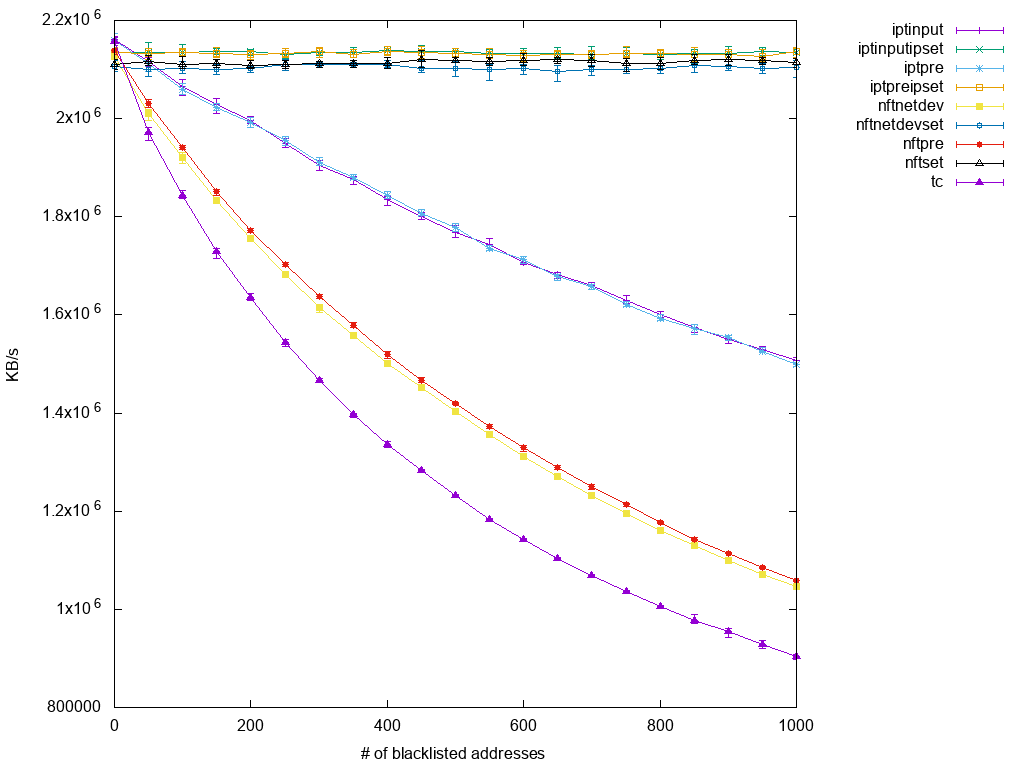 “To me, the most prominent information to draw from this little experiment is that similar iptables and nftables setups are comparable in performance. Yes, nftables is usually a bit behind, but given that development focus at this point is still on functionality rather than performance, I’m sure this is subject to change in the near future.

Regarding scalability, ipset is a blessing to any iptables set up. Nftables follow the path with their native implementation of sets and take the concept to a higher level by extending the list of supported data types and allowing it to be used in further applications using (verdict) maps.

Although I am not fully convinced of my last test’s results, I think it still proves that there is no point in breaking a leg over implementing something in tc if the same is possible in netfilter. At least when it just results in a qdisc with many filters attached, the worst implementation in netfilter still outperforms it.”

back to topic: firewalld

“Firewalld provides a dynamically managed firewall with support for network/firewall zones that defines the trust level of network connections or interfaces.

It has support for IPv4, IPv6 firewall settings, ethernet bridges and IP sets.

There is a separation of runtime and permanent configuration options.

It also provides an interface for services or applications to add firewall rules directly.

The former firewall model with system-config-firewall/lokkit was static and every change required a complete firewall restart.

This included also to unload the firewall netfilter kernel modules and to load the modules that are needed for the new configuration.

The unload of the modules was breaking stateful firewalling and established connections.

The firewall daemon on the other hand manages the firewall dynamically and applies changes without restarting the whole firewall.

Therefore there is no need to reload all firewall kernel modules.

But using a firewall daemon requires that all firewall modifications are done with that daemon to make sure that the state in the daemon and the firewall in kernel are in sync.

The firewall daemon can not parse firewall rules added by the iptables and ebtables command line tools.

So, firewalld uses zones and services instead of chain and rules for performing the operations and it can manages rule(s) dynamically allowing updates & modification without breaking existing sessions and connections.

It has following features.

check if it is up and running:

check what ports are used on your system:

“The former firewall model with system-config-firewall/lokkit was static and every change required a complete firewall restart. This included also to unload the firewall netfilter kernel modules and to load the modules that are needed for the new configuration. The unload of the modules was breaking stateful firewalling and established connections.

How to block/ban a certain ip: