install firefox app and test it for free here: https://appr.tc/

WebRTC (“Web Real-Time Communication“) enables applications such as video conferencing, file transfer, chat, or desktop sharing without the need of either internal or external plugins.[1]

is a collection of communications protocols and application programming interfaces that enable real-time communication over peer-to-peer connections. This allows web browsers to not only request resources from backend servers, but also real-time information from browsers of other users.

WebRTC is being standardized by the World Wide Web Consortium (W3C) and the Internet Engineering Task Force (IETF). The reference implementation is released as free software under the terms of a BSD license. OpenWebRTC provides another free implementation based on the multimedia framework GStreamer.

Everyone knows skype – but skype allows only one-to-one video conferencing it is closed source bought by Microsoft.

Adobe Connect is a cool collaborative closed source Product – which allows a community chat – screen sharing and video conferencing based on Flash and Java-Server.

the question is: can in the era of html5 everybody run his/her own web-video-conferecing site-server without paying high licence fees or using closed source software? 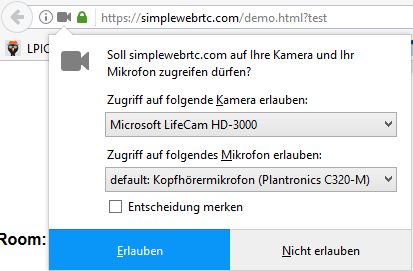 but it is just a tech-demo can’t say anything about everyday usability.

don’t ask me if this connection is encrypted or not…

why udp and not tcp/ip

RTCPeerConnection has two specific traits: – Direct peer-to-Peer communication between two browsers – Use of UDP/IP – there is no guarantee of packet arrival (as in TCP/IP), but there is much reduced overhead as a result. – (By allowing the loss of some data, we can focus upon offering real-time communication.)

“encryption is a mandatory feature of WebRTC”

A Weakness in SRTP

SRTP only encrypts the payload of RTP packets, providing no encryption for the header. However, the header contains a variety of information which may be desirable to keep secret.

One such piece of information included in the RTP header is the audio-levels of the contained media data. Effectively, anyone who can see the SRTP packets can tell whether a user is speaking or not at any given time. Although the contents of the media itself remains secret to any eavesdropper, this is still a scary prospect. For example, Law enforcement officials could determine whether a user is communicating with a known bad guy.

WebRTC is supported in the following browsers.

As of September 2015, Internet Explorer still lacks the native support of WebRTC but ORTC was already added to the new Microsoft browser, Edge.[7][8] Several plugins are available to add the support of WebRTC to these browsers.[9][10] At WWDC 2017, Apple announced Safari would get WebRTC support in Safari 11 [4], and it became available in release 32 of the Safari Technology Preview. [11]