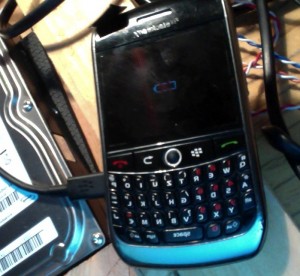 IMHO blackberry was a great device offering a complete qwertz-keyboard (for me touchscreens are still a little typo-problematic).

The small screen was no disadvantage for me, as it could not crack as easily as the “fullscreen” iphones or androids resulting in costly repairs. (usually only trained experts can do it properly)

I dropped it … from several meters … onto the street… dragged it behind me with the ear-phone cables… for several meters and it was still fully functional.

I only used facebook and google sporadically and it worked not super fast but worked.

I could not (exchange/ical) sync contacts and calendar via internet but via usb and the blackberry-desktop-software it worked just fine and that was okay for me.

The phone took ages to boot up but iphone & android have the same problem.

What was not okay for me: not a single blackberry can receive imap-mails “per default” you will need costly extra-software and RIM forces you to use their enterprise-server… which suckx.

Also WhatsApp is not running properly on e.g. a Blackberry Torch.

The Torch in combination with WhatsApp keeps killing my miniSD-Card-Data… this way i lost my music and photos twice.

Just as Apple made a mistake by forcing and limiting people to use iTunes to sync their IPods and IPhones… RIM made that enterprise-server mistake.

The major downfall IMHO was that RIM did not respect and adopt any OpenSource principles or software making it incompatible with the rest of the world.

I thought about getting a second 8900 as “backup” if something brakes with my current 8900.

And after 4-5 years the old 8900 had (software?) problems with the camera and the phone-speaker died.

The new 8900 also had software problems and keeps refusing the original (!) blackberry betteries. Won’t believe it look at this:

all of these batteries it refuses with the above crossed-red-battery sign: 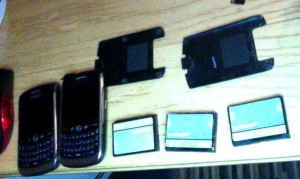 now i am stuck… with a lot of electronic “trash”.

My wish for the future would be a phone on OpenStandards, modular with easily replacebale (upgrade-able?) parts.

The real problem here is, that the industry can not agree on common standards see Apple and Micro-USB… the european union tried to force mobile-phone manufacturers to all use the same mini-USB-charging interface… Apple stubbornly refused.

This can not go on forever – unless the whole planet is filled with electronic waste to be recycled into something that makes sense to many.

So good bye blackberry – i try to get hold on some kind of android/linux-phone.

PS: There are reports that older IPhone (4s) are destroyed by the latest software update (hackers from Samsung screwed the update?) – the latest (0.12014) Samsung phone updates stop at 75% and one college reports his bluetooth stopped working (Apple hacked back?).

This cycle can only be broken – if the people start designing their own phone that makes sense to many and also respects the limited resources on our finite planet.