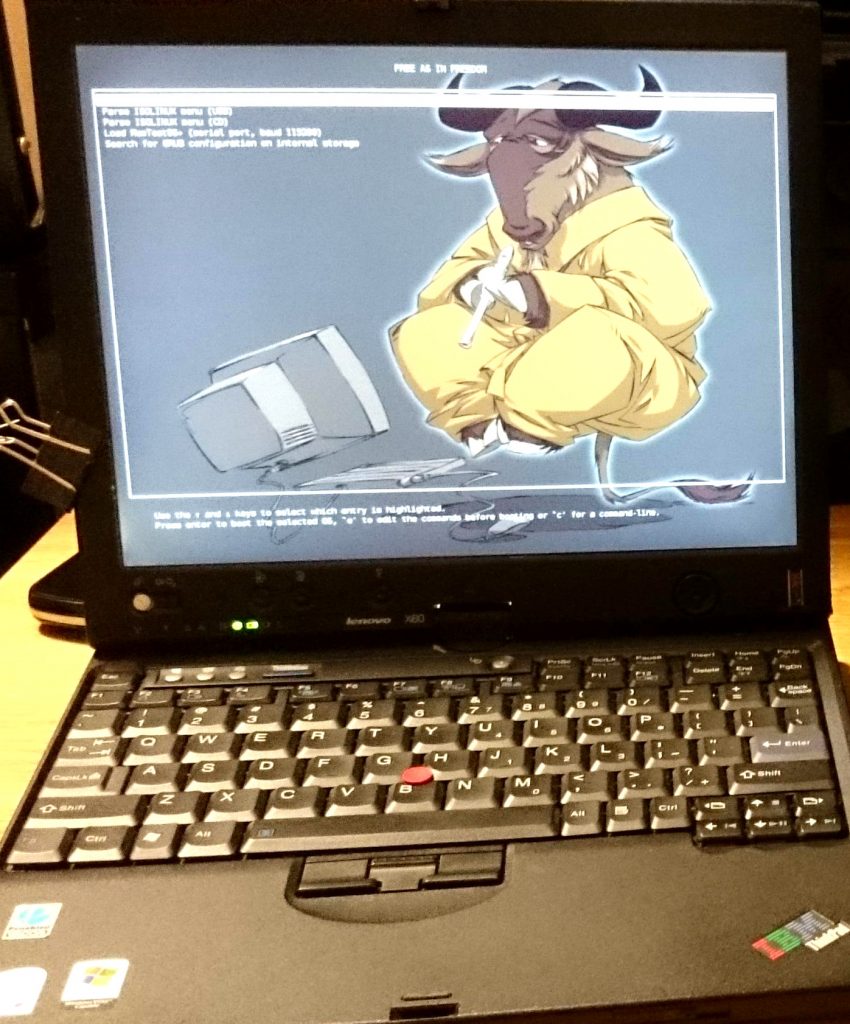 the repository is here: https://notabug.org/libreboot/libreboot

NOTE: LibreBoot (status of 2018) can NOT boot Windows X-D (who cares). So guess one wants to use LibreBoot with GNU Linux only.

even when CoreBoot is a 10 year old project… replacing your BIOS with GNU LINUX can be a major hack on some devices… not anymore on the Lenovo X60 and X60S, which are not the fastest devices out there (Core2Duo 32Bit, 2GB RAM) but with GNU Linux it still kick some ass and can be bought pretty cheap at ebay for below 100€. (as a matter of fact this article is written with a liberated X60S! GOOD JOB GUYS! 🙂

you can download the bench_cpu.sh script here. (it uses sysbench so you will need to have this preinstalled)

The keyboard of the X60S takes time to get used to, especially this F1 button is kind of misplaced (in vim you need ESC a lot but not F1 X-D)

If you want to have faster and more stylisch (what is more stylish than retro hardware? X-D) hardware, best idea is probably to buy a Purism 15 laptop, if you can afford it (2018: $1,599.00, the price of freedom is high) that comes with LibreBoot pre installed.

researchers at the University of Michigan haven’t just imagined that computer security nightmare; they’ve built and proved it works. In a study that won the “best paper” award at last week’s IEEE Symposium on Privacy and Security, they detailed the creation of an insidious, microscopic hardware backdoor proof-of-concept. And they showed that by running a series of seemingly innocuous commands on their minutely sabotaged processor, a hacker could reliably trigger a feature of the chip that gives them full access to the operating system. Most disturbingly, they write, that microscopic hardware backdoor wouldn’t be caught by practically any modern method of hardware security analysis, and could be planted by a single employee of a chip factory.

“Detecting this with current techniques would be very, very challenging if not impossible,” says Todd Austin, one of the computer science professors at the University of Michigan who led the research. “It’s a needle in a mountain-sized haystack.” Or as Google engineer Yonatan Zunger wrote after reading the paper: “This is the most demonically clever computer security attack I’ve seen in years.”

The “demonically clever” feature of the Michigan researchers’ backdoor isn’t just its size, or that it’s hidden in hardware rather than software. It’s that it violates the security industry’s most basic assumptions about a chip’s digital functions and how they might be sabotaged. Instead of a mere change to the “digital” properties of a chip—a tweak to the chip’s logical computing functions—the researchers describe their backdoor as an “analog” one: a physical hack that takes advantage of how the actual electricity flowing through the chip’s transistors can be hijacked to trigger an unexpected outcome. Hence the backdoor’s name: A2, which stands for both Ann Arbor, the city where the University of Michigan is based, and “Analog Attack.”

“However security researchers at Kaspersky Lab are standing by their warning that Absolute Software’s Computrace anti-theft technology poses a hidden threat that might be abused by hackers and cyberspies to plant malware – or worse.

Absolute’s Computrace agent resides in the firmware, or ROM BIOS (Basic Input/Output System), of millions of laptops and desktop PCs from manufacturers including Dell, Fujitsu, HP, Lenovo, Samsung, and Toshiba.”

“Libreboot is a custom distribution of coreboot that removes all proprietary software from the BIOS. Instead of proprietary BIOS boot selector, for instance, Libreboot boots straight into its own GRUB menu that you can use to load your own underlying OS. In addition, Libreboot has automated a lot of the difficult processes around installing coreboot and provides custom scripts and pre-build ROMs for its officially supported hardware.”

“Although the Purism 15 laptop seems to be a viable choice for those who want a free software laptop, at the time of this writing, the crowdfunding campaign is still in process, and even after it completes, it will take some time until they ship. Plus, a new laptop like that doesn’t come cheap, and many people who may want a laptop that runs 100% free software may not have $1,600+ to spend on it. I’ve been able to find used ThinkPad X60 laptops on auction sites as cheap as $30, so if you are willing to live with some of the limitations of hardware that old, it is an inexpensive route to a decent machine that runs only free software.”

“When I first attempted to flash an X60 with coreboot a few months ago, the process involved disassembling the laptop to inspect the underside of the motherboard with a magnifying glass so I could determine which of two BIOS chip types I had. I used that information to hand-patch the flashrom software with custom code and compiled a special version just to unlock my BIOS. Then I downloaded, configured and compiled a custom coreboot BIOS image for my laptop and went through a two-phase flash. In the end, I got it working; however, I needed to strip out and include the proprietary video firmware from my proprietary BIOS to get any video at boot time—useful when you want to select between hard drive and USB boot.”

“There are two primary ways you can brick your laptop during the process. First, you could have a bad flash during the initial bootstrapping flash phase. If that happens but you were using one of the Libreboot-supplied ROMs, all you should have to do is shut off the machine, unplug the CMOS battery for a few seconds, reconnect it and power on your machine to get back to the original BIOS.

If you flash during the initial bootstrapping phase with a custom ROM like I tried one time, lose power during the process, attempt this on incompatible hardware or otherwise encounter a worst-case scenario, you could end up with a completely unbootable machine. Because you can’t boot back to your OS, you can’t attempt to reflash, so you are stuck with a bricked laptop unless you buy hardware that can flash your BIOS chip, such as a BusPirate or a Raspberry Pi running custom software.”

confidence: this video should give you confidence: https://youtu.be/SEgxCg3pSyU
Yes, YOU can do it! 🙂

notice: THERE IS A LOT OF OUTDATED TUTORIALS/HOWTOS OUT THERE!

not so outdated, but maybe not very clear to all users: https://libreboot.org/docs/install/#flashrom_lenovobios

If you can, make sure that RTC battery is not discharged. Discharged RTC battery may lead to brick due to not holding BUC register value.

To find what LCD panel you have, see: ../misc/#get_edid_panelname.

the amount of stuff there can be confusing, so i packed all you need for X60S in this file:

despite the horrific messages above: power down the system but do not remove power, especially RTC battery! with:

Wait a few seconds, and then press power button;

you should be greeted with the a lovely GNU boot screen 🙂

libreboot is running, but there is a 2nd procedure needed.

When you have booted up again, you must flash second stage:

this time, backup of the bios worked with flashrom_lenovobios_sst, so you really have to try both methods.

because it has the “SST25VF016B” SST flash chip

here is the installation report: 2019-04-x60s-LibreBoot-installation-report.txt

it is definitely booting up faster and looks pretty cool 🙂

that is an easy one X-D in the top left corner, the thinkpad has volume mute/down/up buttons. press volume up and you should get sound 🙂 (have to redo this every boot?) 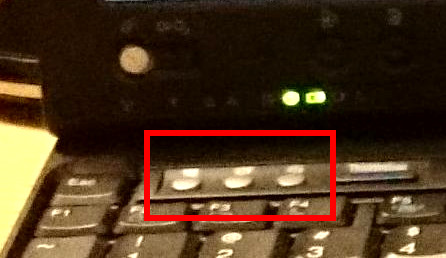 # and then run to manifest the changes

if you want to compile coreboot from source: https://github.com/coreboot/coreboot

you will need those packages:

if you want to get rid of all binary non open source blobs: you will have to remove all hardware that does not work/come with open source drivers.

such as the Intel Wifi Adapter preinstalled in Thinkpad X60S and replace it with an Atheros Chip: https://www.ebay.de/sch/i.html?&_nkw=Atheros+Wireless-N+mPCI+card

(yes those backdoors are ALL OVER THE PLACE/EVERYWHERE/EVERY CHIP!)

IT IS NOT EASY to find a network card/wifi adapter that runs on Open Source drivers… even harder it gets with graphic-cards / GPU, why is that so?

is debian ath9k driver free software? Does not seem like it!

it is a CATASTROPHIC mess, to find out what wifi-chipsets come with free open source drivers…

Many devices require a firmware to operate. Historically, firmware were built-into the device’s ROM or Flash memory, but more and more often, the firmware has to be loaded into the device by the driver during the device initialization.

Some of these firmware are free and open-source, and some of them are non-free, which means that you need to add the non-free and contrib components to /etc/apt/sources.list; see sources.list(5) and Debian archive basics (Debian Reference) for more information.

might not be possible without specialized hardware (rom flasher)