Does my company need SharePoint?

To be honest… SharePoint… seems to be: Office and Wiki in a Browser… is that it?

A Wiki is a editable Website where you can also upload files into… if it exists as OpenSource Software… why would you spend MONEY on a MS product doing EXACTLY THE SAME?

Beeing a Webdeveloper… i know Microsoft likes to “rebrand” existing things to make it look as if they invented it.

Or atleast: to sell it. Sorry to say that… but MS tries to produce “Innovation” by the push of a button – or – by spending money on it.

Innovation does not work like that. Innovation starts with IDEAS. Not technologies.

Webservers exist, Apache2, Lighttpd, NGINX… if you know PHP, HTML, CSS and JS… why in the world would you learn C#, VB and C++ and other stuff… just to create interactive websites?

MS-terminologies and technologies often gave me headaches… so i rather would like to develop and stay on Linux 😀 where people put love not just money into it.

Even worse: MS was NEVER an Internet company and http://wikipedia.org KILLED MS ENCARTA it’s equivalen on DVD and THE BROCKHAUS – it’s equivalent on paper. 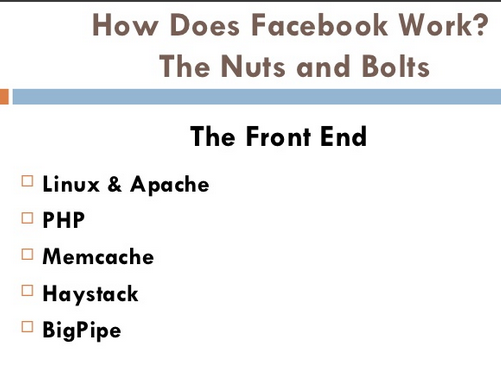 PHP, being a scripting language, is relatively slow when compared to code that runs natively on a server. HipHop converts PHP into C++ code which can then be compiled for better performance. This has allowed Facebook to get much more out of its web servers since Facebook relies heavily on PHP to serve content.

… now THIS IS HOW THE FAST WEB SHIT IS DONE! DO THE PROTOTYPING IN PHP AND THEN GO C++! Sorry MS… you don’t cut it.

Let me make a prediction: MS will be gone by 2020 and Bill Gates will have spend all his money on black jack and hookers by 2030.

Facebook is MASSIVELY relying on OpenSource software and technologies… i just hope they contribute back.

Haystack is not opensource… alternative would be: https://sourceforge.net/projects/weed-fs/

Weed-FS is a simple and highly scalable distributed file system. There are two objectives:

1. to store billions of files!

2. to serve the files fast!

Instead of supporting full POSIX file system semantics, Weed-FS choose to implement only a key~file mapping. Similar to the word “NoSQL”, you can call it as “NoFS”.

More details can be found on http://weed-fs.googlecode.com

Gregory MacBeth provides a nice enumeration of the skills you need to be a “SharePoint developer”.  It’s a good list.  I endorse it.  But examine it closely, and I hope you’ll come to the conclusion that the way to be successful when building Web site solutions (collaborative or otherwise) with WSS and/or portal solutions with SPS is to be a good .NET developer.

Windows/IIS security appear before we ever get to anything about WSS or SPS.  SQL Server as well (but I’m hoping that you’re spending very little if any time programming directly against SQL Server in WSS/SPS-land).

This is by design.  I’ve been building collaborative or knowledge management-focused apps for a long time, and it’s always been frustrating to have operated with tools and platforms several generations behind that which was available for other kinds of solutions.  In 2003, WSS and SPS made collaboration and infoworker-focused developers full citizens in .NET Nation.  What’s more, it meant that .NET developers could use their skills on collaboration and portal solutions.

When it comes to SPS, the only thing that’s different is creating search extensions, i.e., protocol handlers and iFilters, which are decidedly non .NET development topics.

Which reminds me:  Attention tool builders and other interested developers — in the next release, protocol handler development and IFilter development will still need to be in C++.  Do not wait for the rules to change, because they won’t (at least not before “v4”).  If you want to extend our search technology to new content sources and formats, you might as well get started now.  Search gets a lot better in many ways, but the method for developing IFilters/protocol handlers isn’t one of them.

At this stage of the game I can get away with telling you some of the things that aren’t going to change so you don’t dismiss investing in skills/facilities that will still be important for several years to come.  Within the next few months, as soon as we start publicly talking about the next releases of WSS and everything in the Microsoft Office System, I’ll start spilling what we are doing next for developers.  And in the meantime, I’ll push the envelope as much as I can.